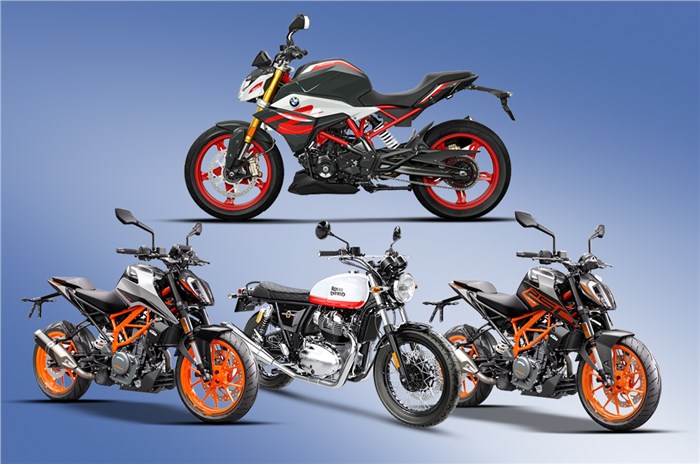 Last week, BMW Motorrad launched the 2020 G 310 R with a massive price drop over the outgoing BS4 model. The updated BMW G 310 R is priced at Rs 2.45 lakh while the outgoing model commanded a notably higher Rs 2.99 lakh. The price cut and addition of new features has certainly managed to rekindle the interest in BMW’s most affordable offering. We’ve compared it against the similarly priced KTM 390 Duke, similarly-specced KTM 250 Duke and hugely popular Royal Enfield Interceptor 650 to see which one comes out on top, on paper.

The G 310 R, KTM 250 Duke and KTM 390 Duke are all powered by BS6, fuel-injected, liquid-cooled, single-cylinder engines with four-valve heads and double overhead cams. The Interceptor 650, on the other hand, employs a parallel-twin engine that uses a single overhead camshaft architecture, however, with the use of 4 valves per cylinder.

All four engines are paired to a six-speed gearbox, and also come equipped with a slipper clutch as standard. The G 310 R and 390 Duke also feature ride-by-wire technology, while the 250 Duke and Interceptor 650 lack this feature.

The table below shows that the BMW G 310 R's 313cc mill produces 34hp at 9,500rpm and 28Nm at 7,500rpm. These figures are higher by 4hp and 4Nm, respectively, than those of the 250 Duke’s smaller engine. The specs of the KTM 390 Duke, on the other hand, are proof that there is no replacement for displacement. It develops 43.5hp and 37Nm, clearly a big advantage over the BMW's engine. Not only does the KTM's engine produce more power but it also peaks at a lower rpm than that of the BMW. It is a similar case with the torque as well that peaks 500rpm below the BMW's engine. The parallel-twin on the Interceptor 650, meanwhile, produces the highest power and torque figures here. Peak power is only 3.5hp more than that of the 390 Duke, but the peak torque figure of 52Nm is substantially higher and nearly double that of what the G 310 R and 250 Duke produce.

The KTMs and BMW have a USD telescopic fork at the front and an adjustable mono shock at the rear. The wheel and tyre sizes are the same as well, with a 110/70 R17 (front) and 150/60 R17 (rear) set-up. The Interceptor 650, on the other hand, uses 18-inch wire-spoke wheels at either end and features a narrower tyre profile in comparison.

The other areas where differences begin to show are in the size of the forks, brakes, suspension travel and ground clearance. Where the BMW has a 41mm front fork, the KTM has a beefier, 43mm WP Apex unit. The BMW's suspension also has shorter travel (140mm front/131mm rear) than the KTM's (142mm front/150mm rear). The Interceptor uses a more conventional telescopic front and twin shock absorber set-up and it also offers the least travel here, - 110mm at the front and 88mm at the rear.

Where the Interceptor does boast of the largest number is with its wheelbase. It’s 1400mm wheelbase should translate to better stability, while the shorter wheelbases on the other three sport nakeds, aid their maneuverability.

As far as the brakes are concerned, the KTMs and Interceptor 650 uses a front disc that is 20mm larger in diameter than the 300mm disc on the BMW. But its rear disc is 10mm smaller. All four motorcycles here offer dual channel ABS and the KTMs also give you the option to switch off the system at the rear.

The new G 310 R retains the overall design of its predecessor but there are some notable changes to the design. The most prominent is around the tank. This new bike features new tank panels and shrouds, and the BMW badge is positioned differently, as well.

Another big change comes in the form of the colour schemes. The 2020 G 310 R is available in three colour schemes – blue and white, black and white, and a bright three-tone black, white and red. The three-tone option, called ‘Style Sport’, also features a red-coloured frame and wheels.

The two KTMs feature  a design language that we have now become quite accustomed to. Very recently, the 250 Duke also adapted the LED headlight from the 390 Duke and the two bikes now look nearly identical. For 2020, KTM has also made the 250 Duke and 390 Duke available in a few new colour schemes.

The Interceptor 650, on the other hand, sports a simple, classic styling, and gets twin exhausts, something that isn't usually seen on motorcycles at this price point.

This is one area where the KTM 390 Duke has the clear upper hand. The Austrian motorcycle's long list of features include a 5-inch TFT display with Bluetooth connectivity and an up/down quick-shifter.

The BMW G 310 R, on the other hand, has none of the above features and a relatively simpler digital LCD dash. It displays the speed, engine rpm, fuel level, gear position, time and trip meter. The 250 Duke, too, misses out on the TFT display and uses a simple LCD cluster.

The Interceptor 650 stays true to its classic roots and features a basic twin-pod analogue cluster - one displays speed and the other shows rpm.

There is no denying that the lower price tag has surely made the BMW G 310 R a much more value for money proposition. It offers a powerful engine, decent features and carries the BMW badge. At this price point, it’s about Rs 12,000 more affordable than the KTM 390 Duke. However, the latter does boast of a more powerful engine and more features. But having said that, the entry into BMW’s two-wheeler family in India has never been more accessible.

The G 310 R is also more capable and better equipped than the KTM 250 Duke. The last bike here, the Interceptor 650, is excellent value for money, but, it’s a completely different motorcycle when compared to the BMW.