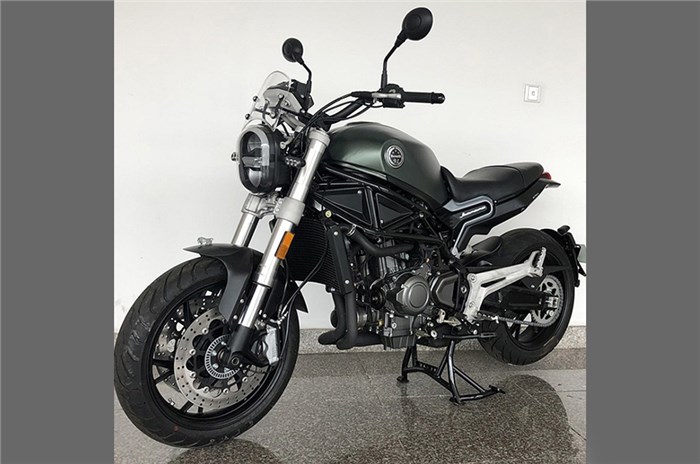 The upcoming Benelli Leoncino 800 has been spotted without camouflage in China, and it looks like this is what the final production version would look like. The image, that surfaced on the interweb recently, shows that not a lot has changed in the Benelli Leoncino 800’s journey from concept (seen at the 2018 EICMA) to production form, except for the alloy wheels that replace the spoked units we’d seen on the bike at the show.

At first glance, it’s quite clear that Benelli has added some more muscle to the Leoncino’s design, making the 800 stand out from its siblings – Leoncino 500 and Leoncino. The beefy tank, as well as the short and flat tail section, lends the 800 the Benelli Leoncino family look, replete with the Lion of Pesaro motif on the mudguard. However, the exposed steel-trellis frame, oval headlamp (most likely LED) and the tiny fly screen above sets it apart. The fat front fork looks similar in size to the Marzocchi fork on the concept machine; however, it could be an internally-developed unit to keep costs in check. The petal discs and Brembo calipers on the concept bike have also been replaced by a set of conventional discs and Benelli branded, radially mounted calipers.

Benelli is expected to plonk in the same 754cc, liquid-cooled parallel-twin engine that powers the Benelli 752S street motorcycle. This motor develops 76.8hp at 8,500rpm and 67Nm of torque at 6,500rpm, which is in the same league as the Ducati Scrambler 800 – its primary rival. Whether the engine is Euro5 (BS6) compliant is not known, as of now.

While there is no official word, we expect Benelli to launch the 2020 Leoncino 800 in India shortly after its global debut at the 2019 EICMA in Milan, Italy. At present, the Benelli Leoncino 250 and the Leoncino 500 are on sale in India, priced at Rs 2.5 lakh and Rs 4.79 lakh, respectively.