The iconic British brand enters India via the CBU route before local operations commence by end of 2018. 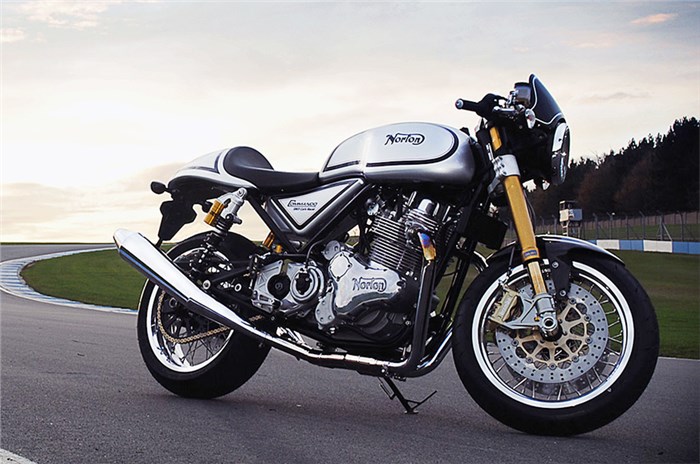 The Norton Commando 961 Cafe Racer has been priced at an introductory price of Rs 23 lakh (ex-showroom, Pune). At the moment, there’s only one unit of the Commando 961 available in the country for sale and it’s finished in a silver shade. Motoroyale, the official distributor for Norton in India, have confirmed that they will import more units based on demand since it’s a ‘make to order’ offering and is hand-built at its facility in Derby, UK. Delivery time for subsequent units will be between two to three months, according to company officials. Bookings for the Norton Commando 961 have commenced in India for a token amount of Rs 11.5 lakh.

The Norton Commando 961 will be the first Norton to go on sale in India and it comes in as a CBU. However, as we previously reported, Norton and Motoroyale announced a joint venture at the 2017 EICMA show, where the latter will locally manufacture Norton motorcycles at its facility. These made in India motorcycles will be used to address demand in overseas markets for Norton. Prices will certainly reduce once local production commences by late 2018 or early 2019.

The Commando 961 Cafe Racer is a modern classic and takes design inspirations from classic cafe racers, which were hugely popular in the UK. The motorcycle features a classic round headlight above which sits a small flyscreen; the fuel tank has been elegantly shaped and the curved tail section with the integrated tail-light completes the look. Complementing the cafe racer look are the aluminium clip-on handlebars, which will result in a canted forward and sporty riding posture. The mudguard and the flyscreen have been crafted from carbon fibre.

Powering the motorcycle is a 961cc, parallel-twin motor with a 2-valve head and push-rod actuation. Norton UK quotes 80hp at 6,500rpm and 90Nm at 5,200rpm. However, the India-spec brochure mentions a lower 71.9hp at 7,500rpm and torque takes an even bigger drop with a peak of 67Nm at a higher 6,500rpm.  Fortunately, cycle parts are top notch and the bike rides on aluminium spoke rims shod with a 120/70 section tyre at the front and a 180/55 section tyre at the back. The 961 Cafe Racer features chunky Ohlins 43mm USD fork at the front and Ohlins twin shocks with remote reservoirs do duty at the rear. Braking hardware consists of fully-floating, 320mm twin-disc brakes and 4-piston caliper from Brembo at the front and a 220mm single disc unit with a 2-piston caliper at the rear. Saddle height stands at 810mm and the fuel tank capacity is 17 litres.

The Norton Commando 961 Cafe Racer doesn’t have any direct rivals in the Indian market and its closest competitor, in intent, is the Triumph Thruxton R that is priced at Rs 11.92 lakh (ex-showroom, Delhi). Norton has set itself a target of clocking sales up to 2,000 units in the Indian market by 2021. That’s an ambitious figure and lower costs through local manufacturing will certainly help. However, the big push will come from the new entry-level model that Norton is also currently developing. This will be a 650cc parallel-twin platform that will certainly spawn numerous models over time. These new motorcycles will play a crucial role in establishing Norton as a bigger player in the international motorcycle business.