Shapur Kotwal & Joy Chaudhuri take a new Beetle and a ’70s classic up to the Beatles ashram in Rishikesh. 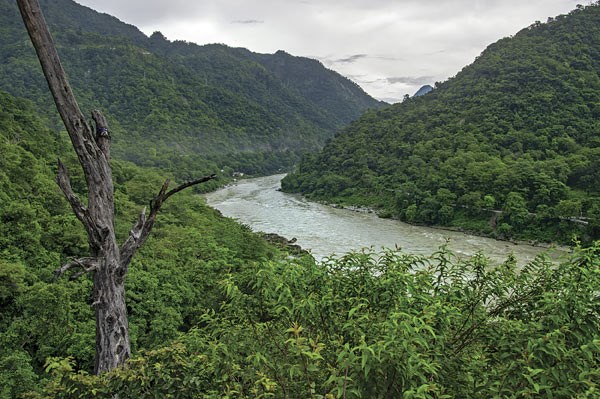 Lennon and Harrison stayed six weeks in the lush and serene environs of Rishikesh. 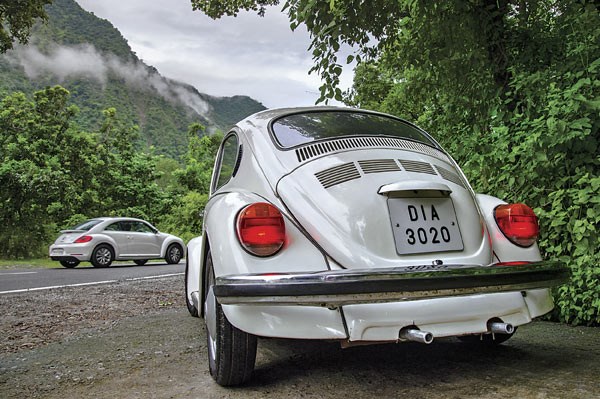 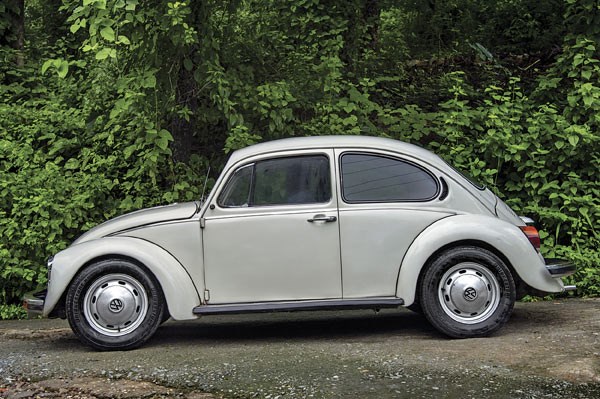 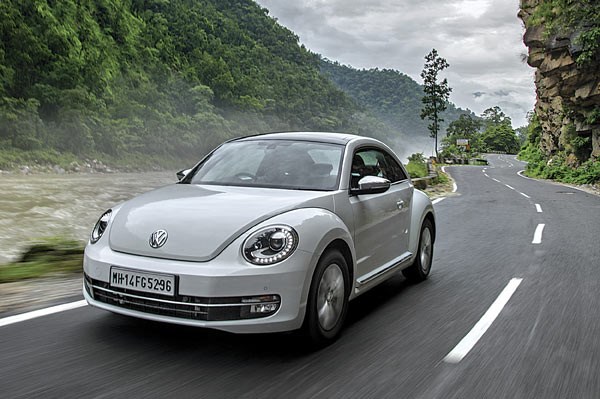 It’s been a long trudge up to Rishikesh, the valley of saints, where the pop band, the Beatles, came to learn meditation in an ashram way back in 1968. Closed and abandoned for decades, the recently reopened Maharishi Mahesh Yogi’s ashram has today become something of a shrine to Beatles fans globally; and that’s exactly where we are headed. But will it be easy to find the so-called Beatles ashram, and what state is it in?

Shapur: So Joy, we’re finally here, overlooking the Ram and Lakshman Jhula. The river looks just fantastic. Look at those eddies, the mini whirlpools and boils; it seems like it’s at its angry best. And we have the cars here too, the two Beetles, the classic and the latest one. Feels like a dream, doesn’t it?

Joy: Rishikesh certainly is a dreamy place, straight out of the pages of Hindu mythology. And it must have been even crazier in the ’60s, what with all the sex, drugs, rock ‘n’ roll, and the hippies floating about. What a time it must have been with the ashrams teeming with people and all the flower power. But do you think there’s anything left of Maharishi Mahesh Yogi’s ashram? 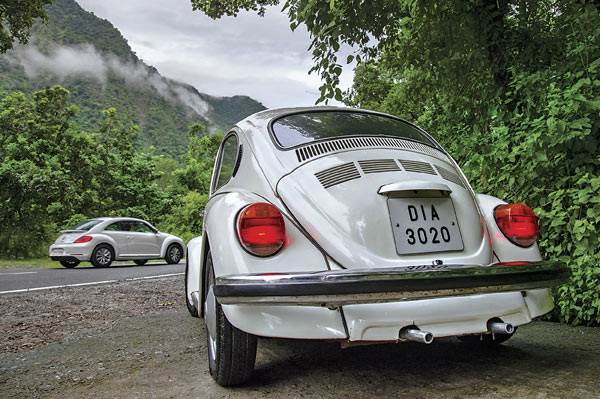 Shapur: Well, that’s what we’ve got to find out on our ‘magical mystery tour’, haven’t we?

Joy: . . . and we’ve got to decide which Beetle we like better. That is going to be tough.

Shapur: Always was difficult. I initially liked Paul, then John and now maybe George, especially for all his solo stuff. . .

Joy: No no, the Beetles not THE Beatles! The cars. Which is better, the flat four or in-line four, rear engined or front engined, air cooled or water cooled? Not the fab four.

Shapur: In the looks department, the old girl for sure; just look at those lines, that cherubic charm, and that cute grin. How else do you think it went from being a tyrant’s dream to an unlikely symbol of peace in the ’60s – the love bug. It was a revolution. The new car has none of that cuteness.

Joy: I quite like the new car. It has a nice blend of modern and retro. I particularly like the manner in which the front fenders and the rear merge into its slightly sportier profile. And I also like that it is wider and more spacious on the inside. Give me a modern-day car with all the bells and whistles technology can engineer any day. But are we just going to sit around here and conduct a clinic, or are we going to head out in these two white beauties and find where the Beatles wrote most of the White Album?

Shapur: Slight problem Joy. Yesterday’s rain knocked out some cell towers, so I’ve no idea where to start. Google maps is kaput. We might as well head back to that small market and ask for directions.

Joy: Well, luckily for you, I already did, at the chai stop down the road. And by the way, it isn’t called the Beatles ashram. It’s known as Chaurasi Kutia, named after its 84 meditation huts. In Hindi, Chaurasi is 84 and Kutia is huts. The ashram is now a part of the Rajaji National park, which is a tiger reserve. 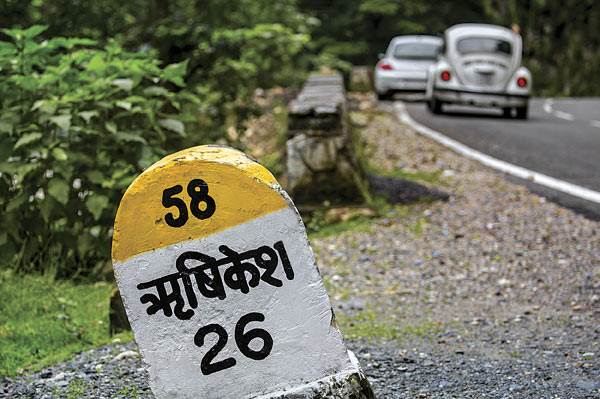 Shapur: Oh, so the lyrics of ‘Bungalow Bill’ must have been true.

Shapur: ‘The Continuing Story of Bungalow Bill’, the song on the White Album – the one about the American guy from the ashram who goes off hunting tigers in the forest next door and always takes his mum along. Horrifying; we were still killing tigers in ’68!

Joy: Okay, so since I have the map scratched out on a piece of paper, I’ll lead. And try to keep up, I don’t want to have to keep stopping for you, your classic seems to be quite slow.

Shapur: Slow in comparison it is, but owner Samarth Luthra’s ’73 is in fine nick, and the air-cooled engine sounds brilliant with the big fan spinning away in the back. It will be quite good on these winding roads. And the car was designed by one Dr F Porsche.

The road that winds along the opposite bank of the Ganga – where the ashram is supposed to be – is a mix of good tarmac and broken sections. There’s plenty of gravel and slush and we keep getting a bit of rain. But the vistas are stunning, and in sections there’s a layer of mist over the river, because the water is so cold and the air is so warm. The old Beetle manages to keep up pretty well until the next photo op.

Joy: Yeah, you were sort of keeping up.

Shapur: The engine flounders a bit, but once it gets going it pulls pretty strongly. And it sounds just great, the whhhrrrrr of the fan mixing and the chuff, chuff, chuff of the exhaust, superb.

Joy: Yeah, I did enjoy that as well when you went ahead of me briefly. It’s such an iconic sound. It looks pretty comfortable around corners too: you don’t seem to be slowing down too much.

Shapur: The rear is so planted because the weight of the engine sits right on top of the rear wheels, and as it has an all-independent suspension and stiff chassis. So it’s quite agile once you get used to the unassisted steering; which by the way I love. That, and the metallic clack-clack of the gearbox. It just has so much charm.

Joy: You make it sound like it’s, well . . almost sporty.

Shapur: The reason I’m staying a bit back, however, is the brakes. They’re only capable of slowing the car gently, so I have to use the gearbox along with the brakes.

Joy: Oh. Maybe you should lead then, I don’t want you running into the back of me. But you sure look like you are making an effort to drive the car; you’ve worked up quite a sweat. 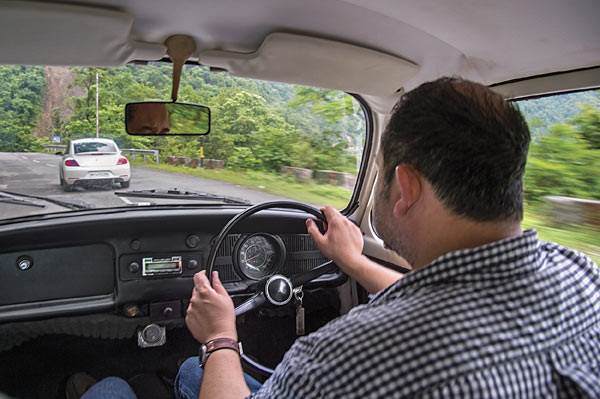 Driving the old Beetle is an aural as well as a physical experience.

Shapur: You don’t like it much, do you? I don’t think it has a bad angle. And the charm offensive it’s just too much.

Joy: I like how it looks. The art deco looks are cool, the interior is charming and it even sounds nice from the outside, but the cabin is spartan and it lacks creature comforts; it’s not for me. I’d rather be in the modern-day luxury car. Just look at the quality of the cabin I’m in. I love the big comfy seats, the air-con is blowing, and I’m even listening to your Beatles CD.

Shapur: But don’t you think it needs more character?

Joy: Maybe compared to the old car, yes, but for this day and age, I think it’s got loads of attitude. And I have no grouse that the engine is in the front and that it ‘pulls’ rather than ‘pushes’. I even like the 1.4-litre turbocharged four-cylinder petrol engine; the 150hp under the hood often comes in handy. But what I particularly like is the manner in which it drives. The handling is much improved over the earlier ‘new’ beetle; that car just felt wooden and boring. This one’s much nicer.

Shapur: Do you know where we are though? I thought we just drove past a largish ashram. Did you stop to get directions earlier?

Joy: The truth is, Rishikesh is full of them. I think we missed a turn earlier, but we’re on course now. Let’s just carry on.

The last few kilometres call for more than a bit of off-roading.We are going down to the river and the road ahead is seriously kaccha, filled with silt and stones – the Beetles actually have their work cut out. Good thing is, they manage spectacularly, both the old and the new car, with the latter in particular having plenty of ground clearance. Then, finally, around a corner, the main gate.

The jungle has taken back a lot, but some bits still remain.

Joy: We’ve made it, we’re actually here. I can’t believe the Beatles spent so much time in this ashram. But it’s not what I expected. This is more like stumbling across a lost city.

Shapur: More a lost alien civilization. Just look at these buildings, they’re just weird, and the forest seems to have reclaimed much of it.

Joy: Careful, some of these dilapidated structures look too dangerous to enter. These curious igloo-like structures must have been the meditation huts. This really does look like the set of a sci-fi movie. It’s incredible to think that this is where the Beatles had one of their most productive periods. They wrote dozens of songs here, most of them for the famous White Album.

Shapur: And George wrote ‘Here Comes the Sun’, that saw the light of day on Abbey road. Then there was ‘Dear Prudence’, which was inspired by American actress Mia Farrow’s – Frank Sinatra’s ex-wife – sister who locked herself up in one of these huts for days. So John Lennon wrote,  ‘Dear Prudence, won’t you come out to play?’ for her. 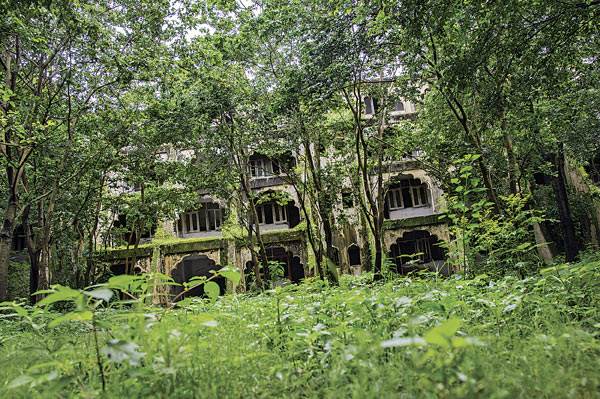 Shapur: Some bits are a bit eerie. . . there are places no one seems to have gone in for years.
We walk into a place called the Beatles Gallery, a big hangar-like hall where there’s a huge amount of wall art. It seems to have attracted plenty of graffiti artists from all around the world.

Shapur: Wow, all the songs they composed in Rishikesh have been made into artwork on the walls. There are great stories behind some of them. ‘Mother Nature’s Son’ was composed after a lecture from the Maharishi; ‘Why don’t we do it in the Road’ was written after Paul saw two monkeys at it; ‘Revolution’ was of course John’s first political song, and the list is endless . . .

Joy: George also learnt the sitar from his friend Ravi Shankar, didn’t he?

Shapur: Yeah, and they hosted the first big charity concert in New York as well. It was The Concert for Bangladesh, to raise funds to the refugees after the 1971 war. And it’s because of this trip that Lennon and Harrison became such big activists.

Joy: Funnily enough though, both the Beatles and the Beetle didn’t have the easiest of beginnings. No one thought the ‘unattractive’ Volkswagen Beetle would be commercially viable after the war, and in 1962, the Beatles were turned down by Decca Records, who, incredibly said the band had no future in show business!

Shapur: Yet another connection. But which car do you want to drive back?

Joy: I feel like going back in time. Let’s swap.