The Meco Racing driver had crashed out of the lead in the pre-finals after being bumped, and started the finals from 12th on the starting grid. 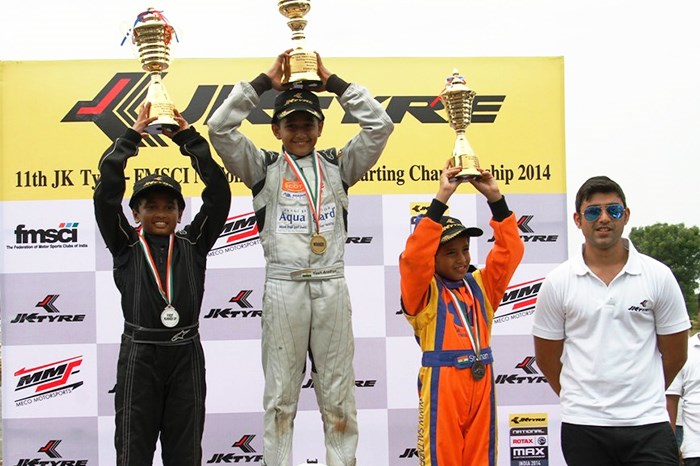 Eleven-year-old Yash Aradhya from Bangalore made a fantastic recovery to win the Micro Category finals at round one of the JK Tyre Rotax Max Championship held in Hyderabad.

The Meco Racing driver had crashed out of the lead in the pre-finals after being bumped, and started the finals from 12th on the starting grid, and drove a brilliant race to win the 15-lap race, few tenths ahead of his second placed teammate Paul Francis, also from Bangalore.

10-year old Shahan Ali Mohsin from Agra finished third, after having lead the race early on.

There was action galore in the final race of the Junior Max category as well, which saw two drivers being penalized 10 seconds each by the stewards, while a third was excluded from the final list as he did not report for scrutiny after the race.

Dark Don Racing’s Kush Maini, who obstructed leader Ricky R Donison of BPC Racing during the race and finished first, dropped to third position after the 10-second penalty. Protesting against Maini’s rash driving, Donison stormed out of the pit lane before his kart could be weighed, attracting sanction from the stewards.

Four more rounds of the championship will be held, with the points from each round adding up for the overall championship at the end of the season.