Team-mate Sebastian Vettel was back in third, behind Melbourne winner Kimi Raikkonen's Lotus. 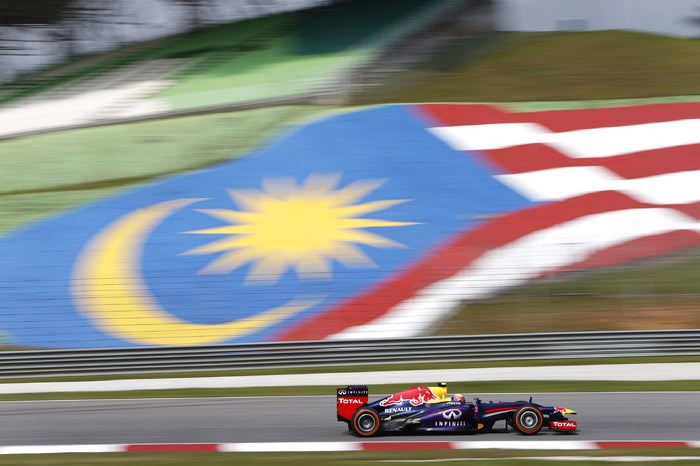 Red Bull returned to the top in opening practice for the Malaysian Grand Prix, as Mark Webber led the way at Sepang on Friday morning.

His team-mate Sebastian Vettel was back in third, behind Melbourne winner Kimi Raikkonen's Lotus.

The Finn had not joined the track until 55 minutes into the session as his mechanics worked to replace a KERS battery.

But Raikkonen needed no time to get up to speed as he immediately put a 1m37.003s lap, 0.068 seconds down on pacesetter Webber and sufficient to split the Red Bulls.

Although Raikkonen was late out of the garage, he did not miss out on much running as it took 34 minutes for anyone to set a flying lap.

Most of the pack waited in the pits for circuit conditions to improve, then set their fastest times in a 10 minute spell of short runs before switching to heavy fuel for the rest of the morning.

Those long runs featured significant pace drop-off as tyres wore, with Lewis Hamilton in particular complaining of his Pirellis being "destroyed".

Adrian Sutil followed up his star turn in Melbourne with sixth place, despite having to pit for repairs after damaging his Force India's wing on a kerb.

Alonso and Sutil's respective team-mates Felipe Massa and Paul di Resta were seventh and eighth, with Hamilton and Romain Grosjean completing the top 10.

Elsewhere, form appeared similar to Australia, as McLaren, Williams and Sauber were all outside the top 10. Sauber driver Esteban Gutierrez committed the only significant error of the session as he went off at Turn 14.