Raikkonen and Vettel finish on the podium, while Mercedes suffers double retirement. 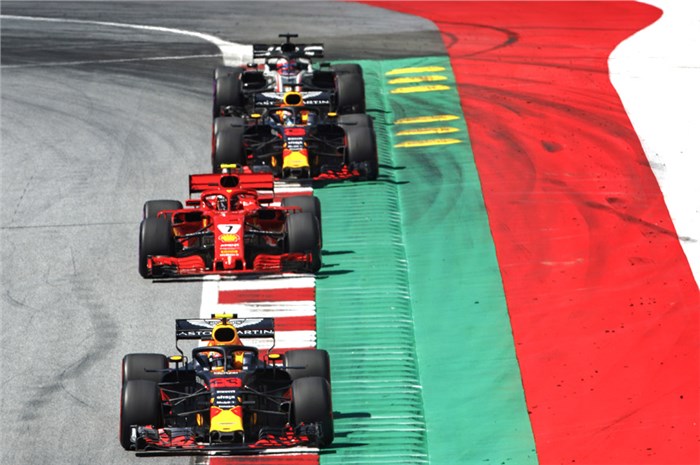 Max Verstappen has become the fourth different F1 race winner this year after claiming victory at the 2018 Austrian GP.

Lewis Hamilton and Kimi Raikkonen jumped polesitter Bottas at the start on the run to Turn 1. Raikkonen then tucked into Hamilton's slipstream and attacked into Turn 3 but locked up and ran wide. That allowed Verstappen to challenge him on the run out of the corner but the Dutchman was rebuffed aggressively and Bottas was able to pass both on the outside of Turn 4. Verstappen got inside Raikkonen two corners later and a slight nudge on the Finn's left-rear wheel pushed him wide and allowed the Red Bull driver to sneak through.

Bottas eventually retired on lap 14 of 71 with a gearbox problem. This triggered a virtual safety car, under which both Ferrari and Red Bull pitted for soft tyres. This left Hamilton as the only one of the frontrunners who did not head into the pits during the virtual safety car – a costly mistake for Mercedes.

After taking his pit stop, Verstappen was running in second place, a little over 13 seconds behind Hamilton. With Hamilton unable to open up a bigger gap over the next couple of laps, Mercedes decided to pit him and he ultimately emerged back out on track in fourth place, effectively handing Verstappen the race lead.

Verstappen held on to that lead for the rest of the race, fending off a late charge from both Ferraris to win the race. However, it was a tale of mixed fortunes for Red Bull Racing at the team’s home race, with Daniel Ricciardo having to retire with an apparent gearbox problem.

Meanwhile, Sebastian Vettel – who had to start the race from sixth place after receiving a three-place grid penalty for impeding Carlos Sainz during qualifying – gained some ground after falling to eighth place at the star, and pulled off an aggressive move on Hamilton to climb up to fourth place. Hamilton ran close behind Vettel for the next few laps, but eventually had to pit for a set of supersofts after struggling with his tyres.

Hamilton only ran for 12 more laps before he was forced to retire from the race after suffering a loss of fuel pressure. This gave the top three an easy run to the podium, with Raikkonen grabbing second place ahead of his Ferrari teammate Vettel.

Elsewhere, Romain Grosjean’s point-less run came to an end after he secured fourth place for Haas – the team’s best-ever F1 race finish yet. His teammate Kevin Magnussen battled back from losing places after not pitting under the virtual safety car to finish fifth.

Force India’s Esteban Ocon and Sergio Perez took advantage of the chaos to rise to sixth and seventh from 11th and 15th on the grid, ahead of pitlane starter Fernando Alonso. The McLaren driver ran 19th early on, but used the virtual safety car and a strong, long second stint to charge to eighth late in the race. That included an aggressive move on Charles Leclerc, who reclaimed ninth on the last lap from teammate Marcus Ericsson after the Swede was let by to try to catch and pass Alonso on fresh tyres.

Nico Hulkenberg and Brendon Hartley joined the three frontrunners in retiring from the race. Renault's Hulkenberg suffered an engine failure early on while Hartley stopped near the end of the race after a bizarre mechanical failure forced him off-track at the penultimate corner and eventually forced him to stop at Turn 2.

Mercedes’ shock double retirement has switched things up in the championship standings, with Vettel now leading the drivers’ championship by one point from Hamilton and Ferrari claiming the lead in the constructors’ standings by 10 points from Mercedes.