Vettel charged up the order to finish 2nd, with Kvyat completing the podium; Leclerc and Bottas crash out. 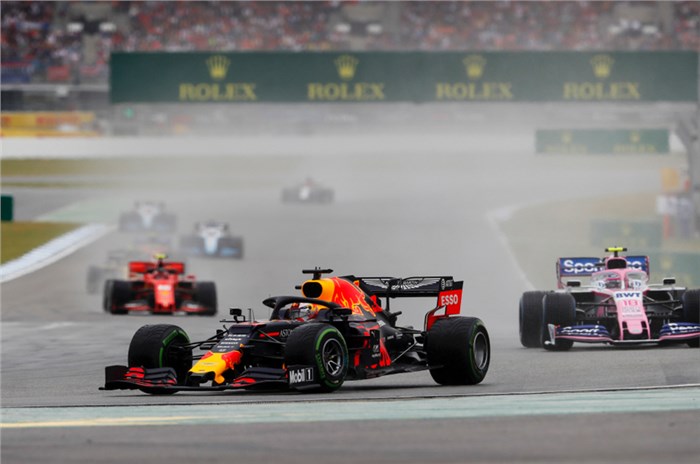 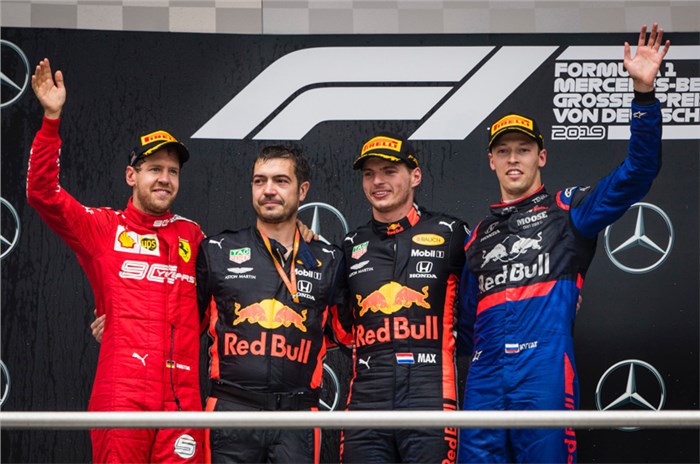 Max Verstappen mastered the tricky, wet conditions at Hockenheim to win the 2019 German GP, with the race catching out a number of frontrunners – including both Mercedes drivers, Lewis Hamilton and Valtteri Bottas, and Ferrari’s Charles Leclerc. Verstappen was joined on the podium by Sebastian Vettel – who pulled off a remarkable recovery drive, from last on the grid to finish 2nd – and Daniil Kvyat, who clinched the last podium spot to hand Toro Rosso only its second-ever top-three finish.

It wasn’t a clean run to victory for Verstappen; in fact, the Red Bull driver’s victory chances received a blow when he spun off heading into the final corner before the pitlane, briefly after changing over to slicks, visibly struggling on the medium compounds. In fact, it was Hamilton who held the lead for the first part of the race. However, Verstappen inherited the lead when Hamilton went off track behind the safety car, which was called out to collect Leclerc’s stricken car, as the Ferrari driver lost his rear end at the penultimate corner and slid into the barriers.

Hamilton had to head to the pits for a front wing change, but lost a chunk of time as Mercedes was not prepared for the unscheduled stop. As a result, Verstappen was able to pit for fresh intermediate tyres and re-join the race in the lead. Additionally, Hamilton was also handed a 5.0sec time penalty for entering the pitlane on the wrong side of the entry bollard. At the point, Hulkenberg was running in 2nd place behind Verstappen, but was soon overtaken by both, Bottas and Hamilton. Just when it seemed like Hulkenberg was on his way to secure a strong finish for Renault, he crashed out of the race on lap 40, bringing out the safety car once again. This made it a double non-finish for Renault as Daniel Ricciardo had to earlier retire from the race with a suspected exhaust issue.

Hamilton dropped down the order as he pitted under the safety car and served his 5.0sec penalty. With a dry line forming on track, Racing Point Force India took a gamble by pitting Lance Stroll for slicks, with Kvyat following suit soon after. The gamble paid off as the rest of the grid soon had to dive into the pits to switch to slicks once racing resumed. As a result, Kvyat and Stroll found themselves running in 2nd and 3rd place, respectively.

Out at front, Verstappen was pulling away and his only real competition was Bottas, who was running in 4th place behind Stroll at the time. Unfortunately, things went from bad to worse for Mercedes as Bottas spun and hit the barrier at Turn 1 and had to retire from the race. His crash brought out the safety car yet again, with Verstappen leading the race followed by Kvyat, Stroll and Carlos Sainz. Behind them, Vettel had steadily climbed up to 5th place.

Once racing resumed, with just five laps to go, Vettel overtook Sainz, Stroll and Kvyat in quick succession to seal a strong second-place finish, 7.3sec behind Verstappen – a feat that seemed unlikely after a turbo issue in qualifying forced him to start the race from last place. Stroll was able to fend off Sainz to finish in 4th place, while Alexander Albon finished 6th.

The Alfa Romeo duo of Kimi Raikkonen and Antonio Giovinazzi crossed the line in 7th and 8th place, respectively, but both drivers received a penalty after the race for clutch infringements. This promoted the Haas duo of Romain Grosjean and Kevin Magnussen to 7th and 8th place, respectively, followed by Lewis Hamilton in 9th place. The penalties for both the Alfa Romeo drivers also promoted Williams’ Robert Kubica to 10th place, handing him his first points finish since his return to F1. Other retirements in the attrition-ridden German GP included Sergio Perez and Lando Norris.