Ferrari’s Charles Leclerc was denied his maiden F1 victory as Verstappen pulled off a race-winning overtake with three laps to go. 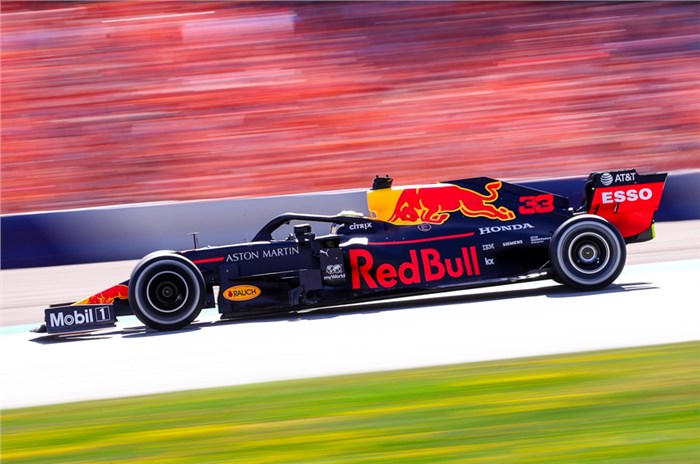 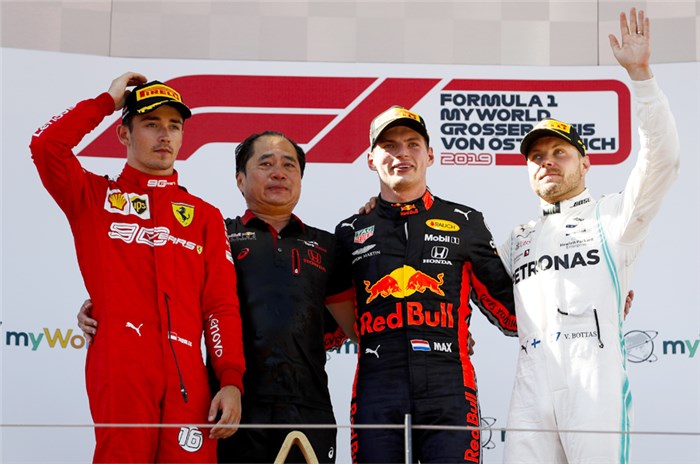 Nine races into the 2019 F1 season, Mercedes’ winning streak has come to an end as Max Verstappen pulled off an impressive comeback drive to win the 2019 Austrian GP at his team’s home track – the Red Bull Ring. In doing so, he denied long-time race leader Charles Leclerc a maiden F1 victory after managing to overtake the Ferrari driver in the closing stages of the race.

Both Leclerc and Verstappen had very different getaways at the start. While polesitter Leclerc was able to comfortably hold on to his lead, Verstappen suffered a poor start due to his car’s anti-stall kicking in and dropped from 2nd to 8th on the opening lap. Valtteri Bottas moved up to 2nd place as a result, followed by Lewis Hamilton, Kimi Raikkonen and Lando Norris. After being unable to take part in Q3 due to a mechanical issue, Sebastian Vettel also enjoyed a strong start and was up to 6th place on the opening lap.

Vettel made quick work of Norris and Raikkonen to slot into 4th place, and he then set about trying to catch up to Hamilton ahead of him. Both Ferrari cars were running on soft tyres at the time, opting for an alternative strategy, while both Mercedes cars and Verstappen were on the medium tyres. But it was Bottas who was first to pit, forcing Ferrari to pit Vettel to cover him off. However, Vettel suffered a slow 6.6sec pit stop as the team didn’t have his tyres ready and he re-joined the track in 8th place. Ferrari later explained that there was an issue with the mechanics’ radio that caused the error.  His teammate Leclerc pitted a lap later and slotted into 3rd place as Hamilton and Verstappen extended their first stint.

Trouble soon hit Hamilton with the Mercedes driver reporting front wing damage. He took his pit stop on lap 31, opting for a new front wing in addition to fresh tyres, while Verstappen followed a lap later, handing the race lead to Leclerc once again. The longer pit stop as a result of the front wing change meant that Hamilton was now down in 5th place, behind Verstappen.

With tyres that were around 10 laps fresher than those of the drivers ahead of him, Verstappen used that advantage to catch Vettel and overtake him for 3rd place after a lengthy battle. The Red Bull driver suffered a brief reliability scare, reporting loss of power as he attempted to overtake Bottas. But he was able to fix the issue and moved up to 2nd place after passing Bottas on the run-up to Turn 3 on lap 56. With 15 laps to go, Leclerc was just over 5sec down the road, but Verstappen was able to catch up to him with five laps remaining, setting the stage for a thrilling battle for the race win.

On lap 68 of 71, Verstappen finally pulled off a move down the inside of Leclerc  into Turn 3, but the Ferrari driver fought back around the outside of the corner to re-take the race lead. Approaching Turn 4 on the next lap, Verstappen moved to the inside, forcing Leclerc wide as the two banged wheels. The incident was under investigation, but the stewards ultimately ruled it a racing incident, allowing Verstappen to clinch victory. Bottas completed the podium in 3rd place.

Vettel pitted for fresh soft tyres soon after being overtaken by Verstappen, but he was able to pass Hamilton for 4th place. Norris finished best of the rest for McLaren, taking a 6th place finish ahead of Pierre Gasly and Carlos Sainz. Meanwhile, Raikkonen and Antonio Giovinazzi finished 9th and 10th respectively, handing Alfa Romeo a double points finish.