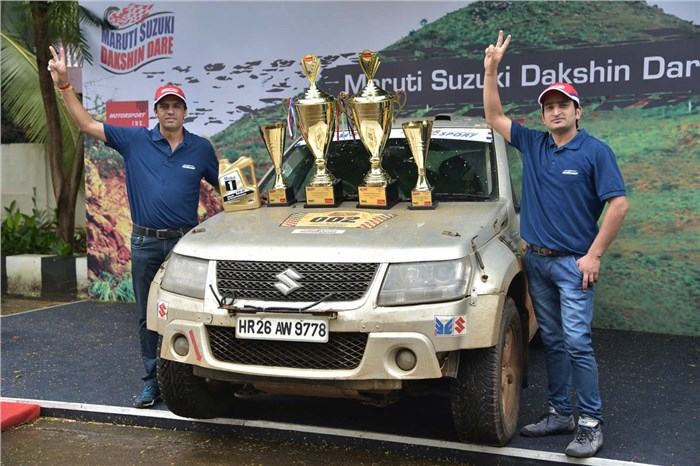 Five days after tussling with mud, slush, rocks and gravel, the 2016 Dakshin Dare has come to its conclusion in Goa. Having set out from Bengaluru on August 1, 2016, this year’s Dare saw the teams traverse a total of about 2,200km through the scenic roads of Karnataka and Goa. We have the names of the victors for 2016, but here’s a recap of what happened over the last week.

On Monday, August 1, the teams started their first major leg – a transport run from Bengaluru to Coorg. The Endurance racers completed their run for the day successfully. However, the demise of Rakesh Siddaramaiah, son of Chief Minister Siddaramaiah, which could have potentially caused unrest in the city of Mysore(part of the route from Bengaluru to Coorg), resulted in the legs for the Ultimate category getting cancelled.

Action, however, resumed on Day 2, where the three legs within Coorg, spanning a total of 63km, saw Suresh Rana and Parminder Thakur speed ahead to top-spot in the Ultimate Car category in their Suzuki Vitara, a lead that the duo maintained throughout the Dare. They were followed by Amanpreet Ahluwalia with co-driver Karan Arya, and defending champ, Sandeep Sharma and co-driver Karan Arya in their Maruti Gypsies. In the Ultimate Bike category, Abdul Wahid, T Natraj and Sanjay Kumar, all astride the TVS Apache 450 FX stood first second and third.
The next set of legs had the teams travel a good 320km from Coorg to Shivamogga, the cultural capital of Karnataka, which would host the next two days of the Dare.

Day 3 of the rally, and the first in Shivamogga, was spread across 382km around Karnataka’s oldest dam – Vani Vilasa Sagara dam, with the stages totalling 103km. There was even a special 3km stage of twisting and winding track in Hosadurga to add to the challenge. With Rana in the lead, the Ultimate Car category saw a Sandeep Sharma move up to second, and also had Jasmohan Saini with co-driver Vikram come in at third position. Meanwhile, in the Ultimate Bikes category, Abdul Wahid pulled out due to a shoulder injury, leaving the top spot free for T Natraj. He was followed by Sanjay Kumar and the new top-3 entrant, Febin Jose.

The second day at Shivamogga had the contestants race the same course as Day 3, fighting to maintain their positions. Suresh Rana still had the lead, but Sandeep had closed in on him, leaving just three minutes gap, unlike the six-odd minutes between the two on Day 3. Jasmohan Saini too managed to hold onto his third position.

On two-wheels, however, there were a few changes in the top-three. T Natrajan still had the top spot, but now, it was Febin Jose in close pursuit, with Akash Aithal newly coming in at number 3.

From thereon, till the conclusion of this year’s Dare in Goa, the top three positions in both Ultimate Cars and Bikes remained unchanged.

In the Endurance category, Ganesh Moorthy and co-driver T Nagarajan along with Raghu Nandan and co-driver M Prakash, had a stronghold in the top-three from the very start. And hence, it came as no surprise that both bagged podium finishes – spots one and two respectively.

At the end of the 2,200km journey, here’s what the results look like: