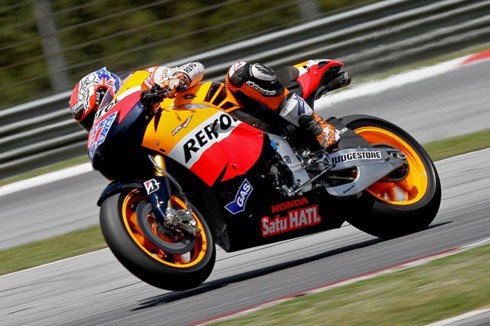 Casey Stoner completed his and Honda’s domination of the Sepang test with the quickest time on the final day. The Australian, who had been fastest on the first two days, continued with his impressive pre-season form by finishing on top of the times with a lap of 1m59.665s.

Stoner finished ahead of team-mate Dani Pedrosa yet again, the Spaniard the only other man to break the two-minute barrier. Gresini's Marco Simoncelli posted a promising third fastest time, with Andrea Dovizioso on the third works Honda in fourth to complete another dominant day for the Japanese manufacturer.

Ben Spies was the first non-Honda rider with the fifth quickest time on the Yamaha, but the American was a full second off the pace set by Stoner. World champion Jorge Lorenzo was seventh on the other works Yamaha, while Valentino Rossi was back in action after having to miss yesterday's session because of the flu. Rossi finished in 11th nearly two seconds off the pace, with team-mate Nicky Hayden trailing behind in 12th position.