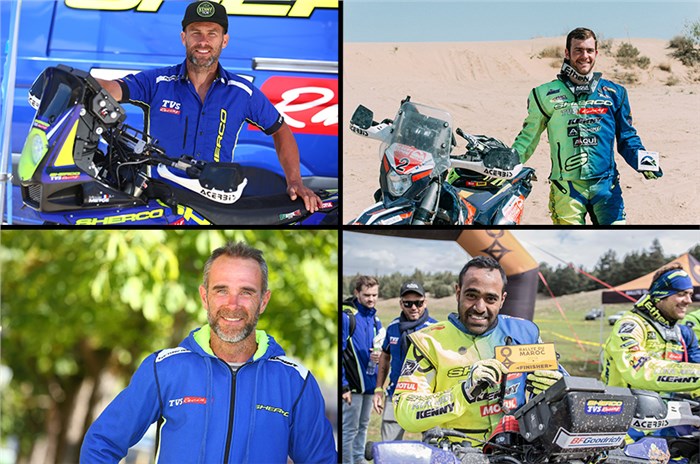 The Sherco TVS Rally Factory Team has announced their five-rider squad for the 2019 PanAfrica Rally. The riders are Michael Metge, Adrien Metge and Johnny Aubert from France, Lorenzo Santolino from Spain, and Abdul Wahid Tanveer from India. Michael Metge won last year's PanAfrica Rally, and will be looking to defend his title, and continue his strong form after also clinching the top spot in this year's Baja Aragon. He will be joined by his brother Adrien Metge, who recently won the 2019 Desert Storm.

The PanAfrica Rally will take place in Morocco from September 21-28, 2019. The rally will also be the debut race with the Sherco TVS Factory team for fellow Frenchman, Johnny Aubert. Aubert finished last year's Dakar Rally in a very respectable 6th place.

Abdul Wahid Tanveer raced in last year's PanAfrica Rally and finished in 8th place. He also managed to take the victory in the Enduro Class of the 2019 Merzouga Rally. Sherco TVS Factory rider Aravind KP, unfortunately had to pull out from the PanAfrica Rally following an injury he suffered during practice.

Michael Metge said “The PanAfrica Rally is one of the toughest and most grueling international rally. I am looking forward to defending my title as well as the team’s. We’re all in a good shape and excited to put up a good show.”

Participants will be looking to make the best of their time in the dunes as the PanAfrica Rally acts as a testing ground in the run-up to the Dakar Rally in January. Follow this space for more updates!