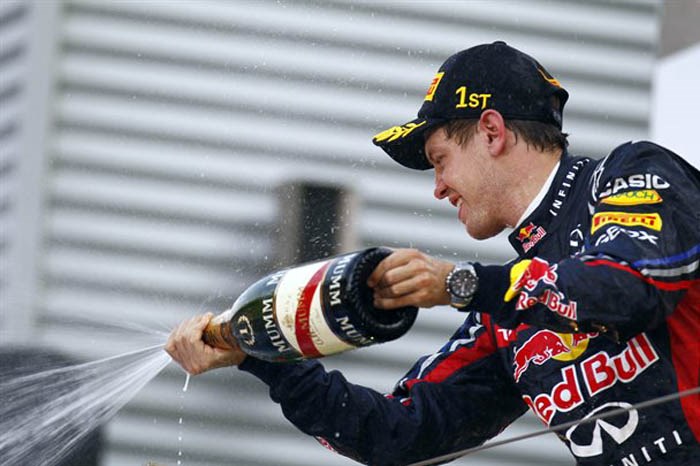 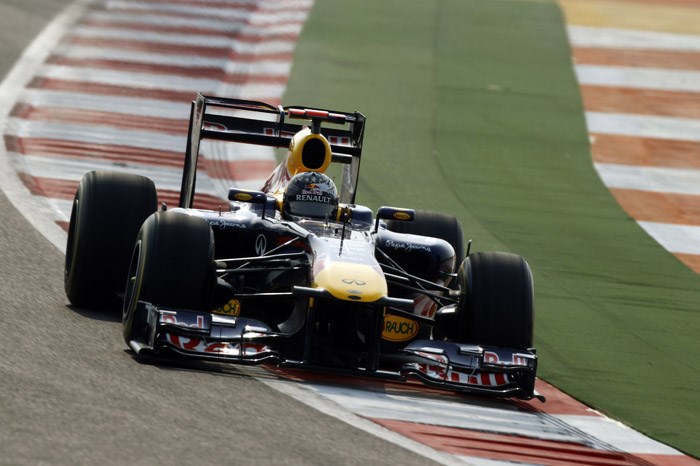 Sebastian Vettel strolled to his 11th victory of the season at the Buddh International Circuit to become the winner of Formula 1's first ever Indian Grand Prix.

The Red Bull driver's latest triumph was one of his most straightforward of his ultra-successful year. As his front row partner and team-mate Mark Webber was attacked by Jenson Button's McLaren and Fernando Alonso's Ferrari at the start, Vettel was free to pull clear.

He sat on a four to five second lead for most of the distance, as he led every lap and completed a perfect performance with the fastest lap of the race as well.

Button got through to second at the first corner, as Alonso twitched under braking and ran wide, letting Webber keep third. The Australian mounted some vigorous attacks on Button over the opening laps, before the McLaren managed to escape and head off for an ultimately uncontested second.

Webber then lost third to Alonso at the final stops, when being the first of the frontrunners to change to the hard Pirellis cost him.

Lewis Hamilton and Felipe Massa's turbulent season continued with yet another collision between them. The Ferrari had got ahead of the McLaren on the first lap and was a safe distance ahead until an error just before half-distance left Massa vulnerable to attacks from Hamilton.

They eventually collided as Hamilton went down the inside at Turn 5 - with the stewards deciding Massa was at fault for leaving insufficient room and giving the Brazilian a drive-through penalty. Massa later retired when he smashed his suspension on a kerb, just as he had in qualifying, while Hamilton recovered from ninth to seventh after pitting for a new front wing.

He finished behind the two Mercedes, which were led by Michael Schumacher, who had moved onto Nico Rosberg's tail with a fast start then jumped him for fifth with a late final pitstop.

Toro Rosso looked set to get both cars in the points until Sebastien Buemi stopped with smoke pouring from his machine. Jaime Alguersuari went on to take eighth, ahead of Adrian Sutil in the leading Force India, and Sergio Perez, as the Sauber man proved the most successful of those who ran ultra-short opening stints on hard tyres then switched to softs for the duration.

The Buddh layout proved tricky for the field to safely navigate as one on the first lap. First a brush between the two Williams sent Rubens Barrichello into Kamui Kobayashi's Sauber, which then rejoined in the path of Timo Glock's Virgin. Among several other brushes of wheels around the lap, Jarno Trulli was left with a puncture after his Lotus was punted into a spin by an HRT.