The German was faster than Mercedes team-mate Lewis Hamilton throughout the session at Sochi. 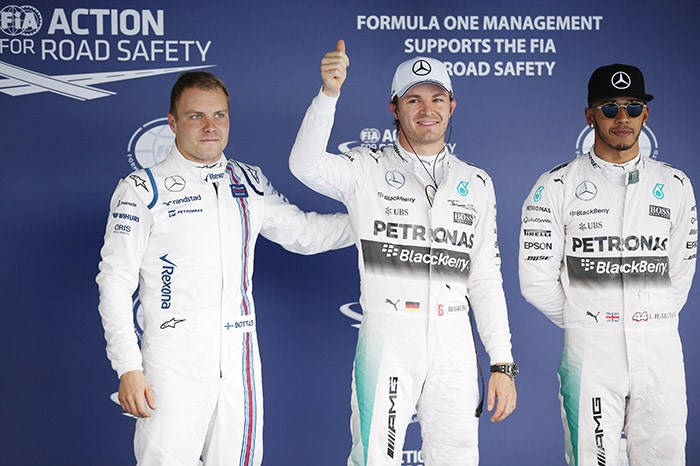 Nico Rosberg claimed his second consecutive pole position in Formula 1, as Mercedes comfortably set the pace in qualifying for the Russian Grand Prix.

The German was faster than Mercedes team-mate Lewis Hamilton throughout the session at Sochi, and he was able to deny the world championship leader a 50th career pole for the second race running.

Cool track conditions meant the drivers had to complete more than one timed lap on a set of tyres to get them up to temperature, and both Mercedes drivers only attempted one run in Q3.

Rosberg lapped 0.320 seconds faster than Hamilton on his first flying lap, before Hamilton made a mistake and went off at Turn 13 on his second flier, so headed for the pits.

Rosberg was 0.160s slower than his best on his second flying lap, but that mattered not, as his earlier time was enough to secure his third pole of the season.

Valtteri Bottas was again best-of-the-rest, fractionally clear of Sebastian Vettel's Ferrari, which improved by nearly two tenths on its second Q3 run but fell 0.053s short of toppling the Williams.

Vettel's Ferrari team-mate Kimi Raikkonen made a mistake on his second Q3 effort at the same spot as Hamilton and wound up fifth fastest, ahead of Force India pair Nico Hulkenberg and Sergio Perez, who were separated by less than half a tenth of a second.

Russian home hero Daniil Kvyat failed to make the top-10 shootout by just under a tenth of a second, setting the 11th fastest time in Q2 and complaining: "the tyres were not ready" temperature-wise.

Jenson Button was over half a second further back in 14th, but faster than the second Lotus of Pastor Maldonado.

Felipe Massa made a mess of his first run in Q2 then failed to make the cut on his final run, complaining of traffic.

The Braziian was only 15th fastest, a full 1.701s slower than Williams team-mate Valtteri Bottas, who was third quickest in Q2.

Fernando Alonso was the highest-profile driver to fail to make it through the first part of qualifying.

Last-gasp improvements from McLaren team-mate Button and Nasr put the double world champion out in Q1.