Rookies slug it out

JK rookie rotax round one 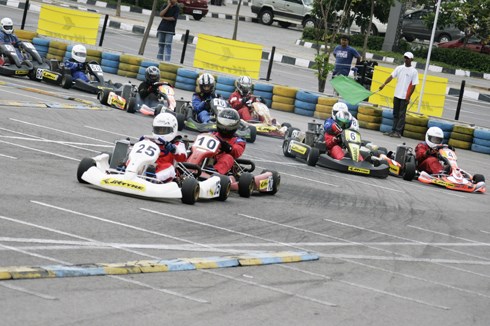 The first round of the second edition of the JK Tyre- MMS Rotax Rookie Cup culminated amongst a slew of thrilling races held at the Hyderabad Kartainment track situated at Shamshabad airport.

Karters competed in Micro Max, Junior and Senior categories for the top honour of being the best new karter in the country and resultantly getting a chance to compete in the national championship with the big boys.

In the Senior Category it was Karminder Singh from Meco Racing who put on a dominating show, winning four races out of five on the weekend while a crash prevented him from finishing the last race.  Irrespective, the Delhi lad sits comfortably on top of the points table with 104 points- a comfortable cushion over 72 points scored by second placed Mithun Ganatra from Mohite’s Racing. The Pune lad couldn’t make it to the podium in races two and four but a third place in race three and a win in the final race due to Karminder’s woes lead to a solid haul of points.

Third in the points tally is Raj Ganatra driving for Rayo Racing with a total of 67 points, thanks to three podiums through the weekend but a DNF in the last race skewed his chances of moving up the leader board.

In the hard contested Junior Category, another Pune lad Gaurav Rajan Davare from Mohite’s Racing is leading the championship with a total of 120 points. Four first places through the weekend and a second place contributed to his almost perfect weekend run.  The next spot in the Junior championship is held by Arjun Chhiba from Meco Racing with 80 points- the Delhi lad taking time to get into the rhythm during the first two races with a fifth and sixth place finish but featured consistently on the podium in the remaining three races. Third in the Junior points table is Ananth Shanmugham, also driving for Meco, with 63 points. The Bangalore lad managed to finish on the podium thrice during the course of the weekend to cement his spot on the points board.

The lilliputs in the Micro Max category fought it out as hard as their older brethren with Gaurav Rakesh Marne from Mohite’s Racing coming out on top with a haul of 120 points in his kitty. This feat was achieved thanks to four top spots during the course of the weekend and a second place in race three. Close behind in second spot is Akash Gowda from Meco Racing with 105 points- the Bangalore lad displaying a slew of consistent finishes, taking his lone win in race three ahead of tally leader Gaurav. In a commendable third place is lone girl driver Mira Kirti Erda driving for Mohite’s Racing, with 70 points. The Baroda girl scored four third place finishes during the weekend, securing the third spot in the championship in the process.

The final round of the JK Tyre MMS Rotax Rookie Cup is scheduled to be held on May 22-23, which will decide who the fate of the best rookie karters in the country. We can’t wait to see new faces in the national championship slugging it out with established names. The battle is on!