The #2 Porsche crew only claimed the lead in the penultimate hour of an incident-filled race when Bernhard passed LMP2 racer Ho-Pin Tung. 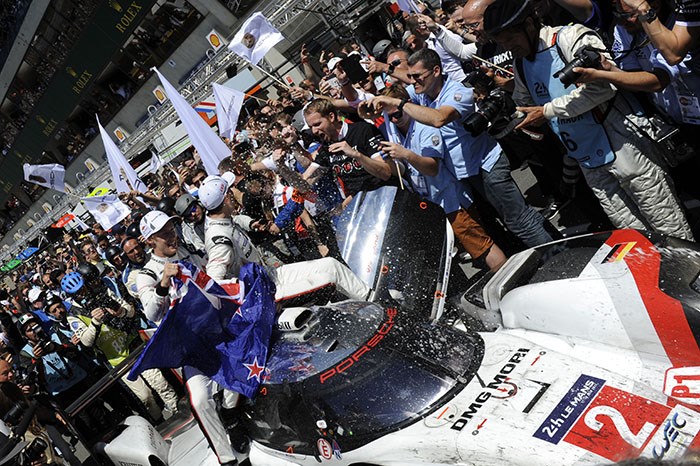 The #2 Porsche crew only claimed the lead in the penultimate hour of an incident-filled race when Bernhard passed LMP2 racer Ho-Pin Tung in the #38 Jackie Chan DC Racing ORECA.

Bernhard eventually finished over a lap clear of Tung to secure his and Bamber's second Le Mans wins and the first for Hartley.

The trio's late victory bid came after a motor generator unit failure in the fourth hour dropped the 919 Hybrid crew 18 laps behind the leaders.

It looked like the sister #1 car would take a dominant victory ahead of the LMP2 runners until it ground to a halt with a lack of oil pressure with three hours left on the clock. At the time it had a massive lead of 13 laps.

The early stages of the race were all about Toyota until the Japanese manufacturer's 'curse' at Le Mans struck again.

First the #8 TS050 dropped out of contention in the eighth hour with an MGU issue when running second.

Neither of the other two Toyotas made it beyond half-distance.

The #7 car of Mike Conway, Kamui Kobayashi and Stephane Sarrazin led from pole and was beginning to build a commanding advantage when a clutch problem caused the car to slow as it crossed the start/finish line during the 10th hour.

Kobayashi, who set a new circuit record qualifying lap, attempted unsuccessfully to get the car back to the pits.

Then, just minutes later, the #9 car was also out of the race after being hit by the #25 Manor ORECA of Simon Trummer.

The contact caused a rear-left puncture for the Toyota and Nicolas Lapierre was also unable to make it back to the pits with too much damage done to the car.

But the shortest race of all was for the ByKolles CLM crew.

Oliver Webb hit the wall on the opening tour at Terte Rouge and the car was later retired in the second hour with an engine issue.