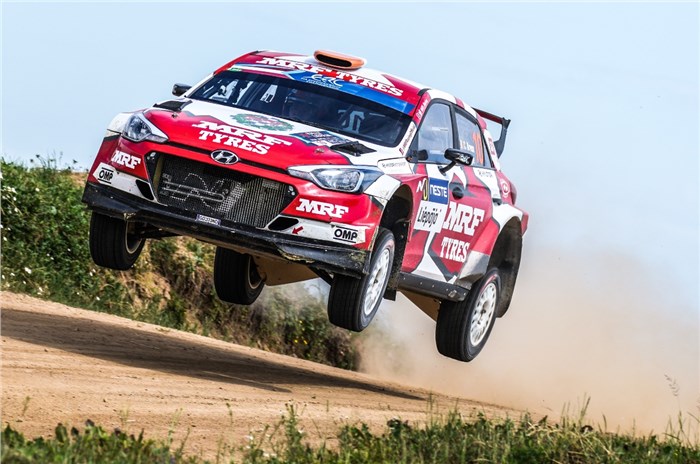 Round 2 of the 2021 European Rally Championship, Rally Liepaja in Latvia comprised fast, gravel stages. Crucially, this was only MRF’s third competitive outing on gravel. Breen and co-driver Nagle set the pace early on in their Hyundai i20 R5 and had climbed to 2nd place overall at the end of Friday’s running.

The pair was involved in an intense battle with Nikolay Gryazin and Konstantin Aleksandrov (Volkswagen),  Efrén Llarena and Sara Fernández (Skoda), and Alexey Lukyanuk and Dmitriy Eremeev (Citroen), with just 13.4 secs separating the four cars heading into the final day of racing. But they pulled off the perfect balance of pace and caution to hold on to 2nd place overall, finishing 17.3 secs behind rally winners Gryazin and Aleksandrov.

“We had to push all rally long. There was no room to relax this weekend. This series is so strong and you have to fight for the podium,” said Breen.

Team MRF Tyres has achieved so much in this campaign and a podium was a big part that was missing. To achieve a podium for Team MRF Tyres is very satisfying. The Hyundai i20 R5 felt so good through the rally but we had to push the entire way. The entire team at MRF Tyres should be proud of what we have achieved in a short amount of time. We entered the European Rally Championship a year ago and Rally Liepaja is only our third gravel rally. It is a great result,” he added.

MRF in the European Rally Championship

This is MRF Tyres’ first-ever ERC podium result since it entered the championship back in 2020. Just recently, the Indian tyre manufacturer also picked up a win at Round 4 of the Finnish Rally Championship. The main aim of these rally outings has been to test its tyres in a competitive environment, on a variety of surfaces.

Next up, Team MRF Tyres will be competing in Round 3 of the ERC, Rally di Roma Capitale on July 23-26.