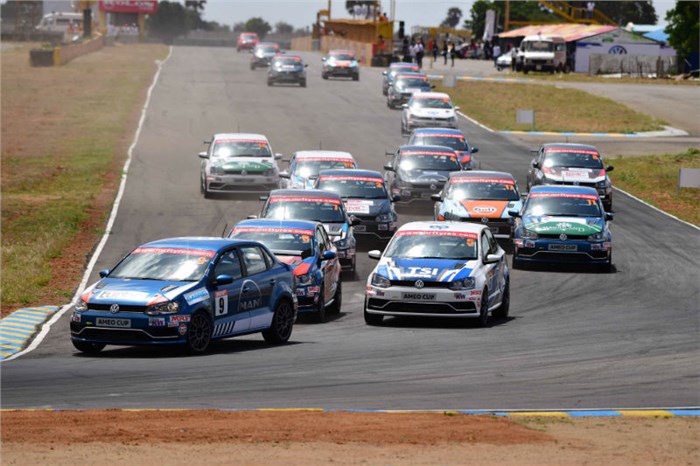 Karminder Singh and Sandeep Kumar bag two podiums each in the Ameo Cup. 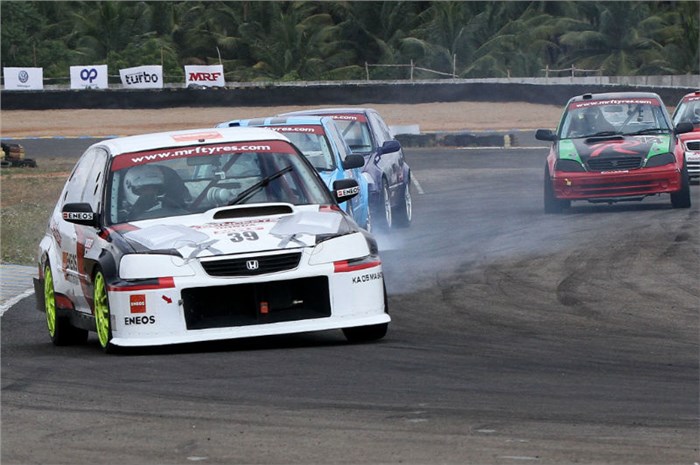 Day 2 of the 2017 MRF National Racing Championship ran two races each of the Ameo Cup and the India Touring Car (ITC) classes. Here’s a report.

Ameo Cup
The opening race of the Ameo Cup was a lights-to-flag victory for Delhi boy Karminder Singh. He gathered a healthy lead ahead of Sandeep Kumar and Jeet Jabakh; the three crossed the finish line in the same order. Jeet, however, lost his podium finish to Mumbai's Aditya Pawar due to a 20sec penalty after overtaking during the yellow-flagged lap 10.
The safety car came out after guest driver Benjamin Gracias' Ameo number 18 went off the track at C1. Besides Jeet, Goa's Donovan Vaz was penalised for overtaking behind the safety lap.

The second and final Ameo Cup race for round 1 followed a reverse grid format with Tauhid Anwar from Bangladesh leading the grid. But it didn't take the more experienced Sandeep and Karminder much time to slip past the newer racers. Sandeep brilliantly defended his first spot from reverse-grid expert Karminder's relentless attacks until the end and grabbed a well-deserved victory. Dhruv Mohite played it safe, securing his third position for the duration of the race, just behind Karminder. Finishing fourth for the second time on Sunday was Jeet Jabakh, who worked his way up from eleventh on the grid at the start of the race.

ITC
Reverse grid Race 2 of the Indian Touring Car category started with V. Nikanth Ram, C. Rajaram and Deepak Chinappa on top of the grid. Race 1 winner Arjun Ramaswamy started fourth. Both Chinappa and Ramaswamy made easy work of the racers ahead and took the lead early in the race.
2016 ITC champion Arjun Narendran put up a strong show, powering his way into third from eighth. He spun out on the main straight, losing five positions. Nevertheless, he wove through the competition to finish third behind Ramaswamy.
The grid for Race 3 was set according to the second fastest qualifying times. Narendran started on the top but ran off the track in Lap 2. Chinappa, hot on Narendran's heels, wasted no time in taking charge of the race, and from thereon, consolidated his lead. Narendran was then overtaken by Ramaswamy, but the latter's Esteem number 59 broke down in Lap 8. This left D. Vidya Prakash in closest contention for the third position.

The MRF National Racing Championship will head to the Madras Motor Race Track on July 22-23 for Round 2.