The Repsol Honda rider has undergone surgery for a fractured right humerus, but will race in this weekend’s Andalucía GP. 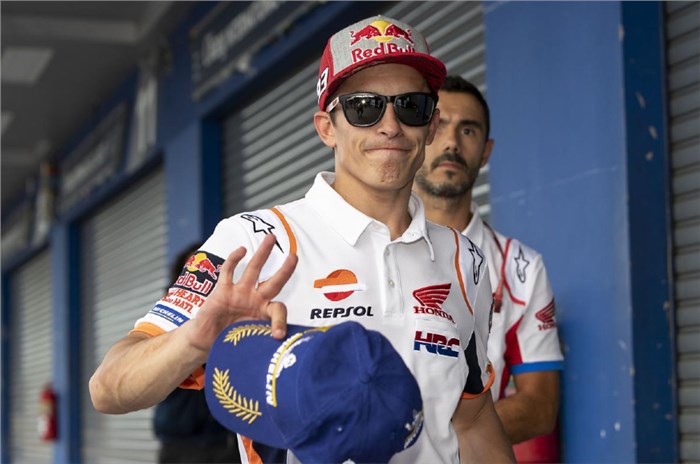 In a rather surprising turn of events, six-time MotoGP world champion Marc Marquez has been declared fit to race in this weekend’s Andalucía GP, just four days after suffering a fractured arm at the season-opening Spanish GP last weekend.

What happened to Marquez at the Spanish GP?

Despite showcasing a clear pace advantage at the opening round of the 2020 MotoGP season, the race at the Jerez Circuit ended on a disastrous note for Marquez. After losing traction at Turn 4, he’d mounted a spirited comeback and was running in third place, when he suffered a high-side at Turn 3, ending his race.

The crash left him with a fractured right humerus for which he travelled to Barcelona on Monday and underwent successful surgery. With no radial nerve damage detected, Marquez was hoping to return to racing as soon as possible. However, it was largely assumed that he would be out of action for this weekend’s Andalucía GP, which will be held at the same venue as the opening round.

In the aftermath of the incident, Marquez’s team, Repsol Honda, announced that it wouldn’t run a replacement rider at the second round. MotoGP’s traumatology specialist Dr Xavier Mir has explained that Marquez is already doing recovery work on his shoulder, elbow, wrist and hand. But he added that the Spanish rider could at best hope for a return at Brno in two weeks.

Nevertheless, Marquez decided to travel to the Jerez Circuit earlier today and, after undergoing a medical check, has been passed fit to race by MotoGP’s medical team. Along with Marquez, two other riders who were injured and unable to participate in the Spanish GP – Cal Crutchlow and Alex Rins – have also passed their medical checks.

Honda Racing Corporation’s team manager Alberto Puig added that Marquez will initially complete some running on Saturday to see if he’s capable of competing in the race. “Originally, clearly Honda’s position was not to run at this race and try to run in Brno. But, after what we saw and heard from Marc and the doctors, who declared him fit, we came to an understanding. He will try on Saturday and depending on how he is feeling, he will try to race. But we asked him to check on Saturday first to really understand if he’s capable of doing the distance. From last Sunday to today things have gone very quickly and frankly we are surprised,” he said.

This may seem like a superhuman feat, but MotoGP has seen multiple riders in the past return to action mere days after sustaining major injuries. In 2013, Jorge Lorenzo managed to compete in the Assen GP just 48 hours after suffering a broken left collarbone during a crash in free practice.