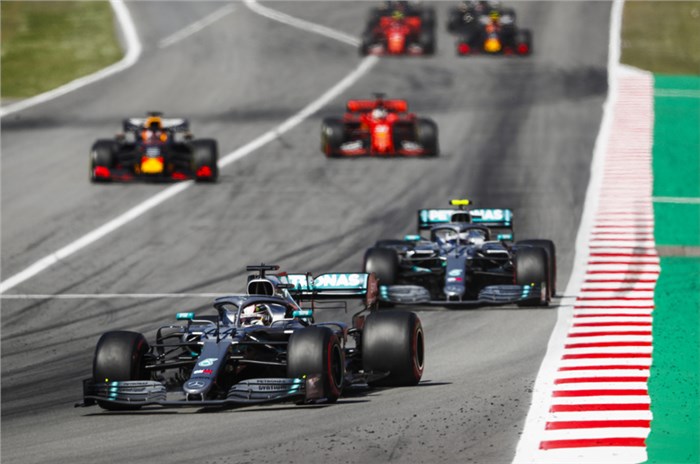 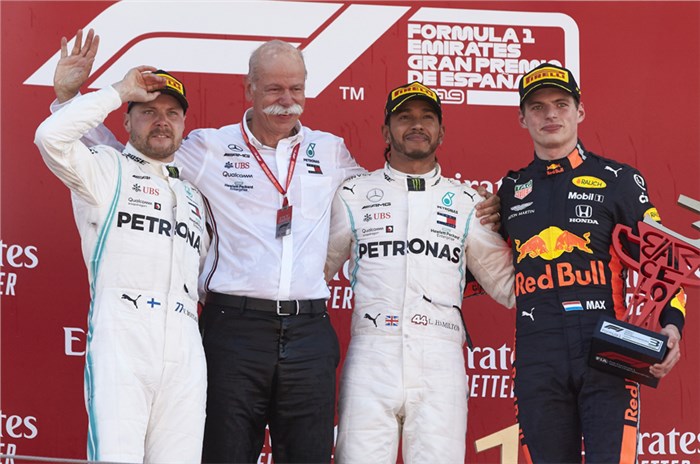 Lewis Hamilton claimed his third win of the 2019 F1 season after storming to victory at the Spanish GP ahead of teammate Valtteri Bottas, helping Mercedes bag its fifth consecutive 1-2 finish this season.

The race start saw a three-way battle between pole-sitter Bottas, Hamilton and Sebastian Vettel. Hamilton inched ahead of the other two to take the lead into the first corner, while Vettel locked up and ran deep into the corner, picking up a flat spotted tyre in the process and giving Max Verstappen the chance to move up to 3rd place. The Mercedes duo then swiftly started pulling away out at front, with Vettel falling back on his compromised tyres. Vettel let his teammate Charles Leclerc through to 4th place on Lap 12, but by then Leclerc was already 11sec off the lead.

With Ferrari committing Vettel to a two-stop strategy, Red Bull decided to pit Verstappen early to cover him off as well. Interestingly, Ferrari suffered slow first pit-stops for both of its drivers, struggling with the left rear tyre. With fresh tyres on, Vettel quickly cut through the pack and soon found himself behind Leclerc, who was running on the more durable hard tyres after his first pit stop. The duo spent several laps battling each other while Mercedes continued to extend their lead. But with Vettel running on a different strategy compared to his teammate, Ferrari used team orders to swap the two on track.

The field was bunched up when the safety car was deployed on Lap 46 as Lando Norris and Lance Stroll collided at Turn 2. Hamilton and Leclerc pitted under the safety car, re-joining the track in 1st and 4th place respectively, while Bottas, Verstappen and Vettel had already pitted before the safety-car period.

After the safety car pulled in, Hamilton made a good restart, managed to keep Bottas behind him and once again started pulling away. He went on to take a commanding victory, just over 4sec ahead of Bottas. Verstappen held on to 3rd place ahead of Vettel. Behind them, Gasly applied some pressure to Leclerc in the closing laps; but was unable to pull off an overtake and had to settle for 6th place.

Claiming the benefit of Toro Rosso’s double-pit-stop mishap– the team appeared to not have Daniil Kvyat’s tyres ready and this, in turn, held up Alex Albon – Kevin Magnussen took 7th place for Haas/Ferrari. While Kvyat was able to finish in 9th place, the incident dropped Albon out of a points scoring position. Magnussen’s teammate Romain Grosjean wrapped up the top ten. He was running in 8th place, but was overtaken by Carlos Sainz and Kvyat in the final few laps of the race.

In addition to winning the race, Hamilton also scored one additional point for setting the fastest lap. This moves him to the top of the drivers’ championship, 7 points ahead of teammate Bottas and 46 points ahead of Verstappen, in 3rd place.

In the constructors’ standings, Ferrari now trail Mercedes by a mammoth 96 points.