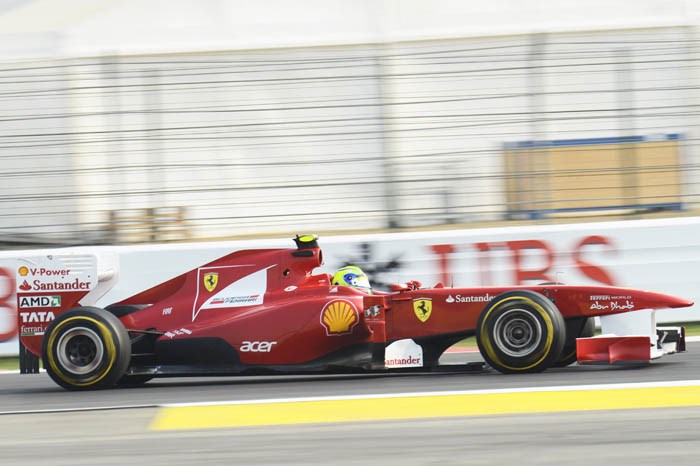 While the Ferrari's new front wing continued to prompt distinctive showers of sparks as it vibrated again the track surface, the revised car showed promising pace, with Massa lapping the dusty track in 1m25.706s 18 minutes before the end of the session to claim the top spot.

They were split by champion Sebastian Vettel, whose Red Bull had been quickest for the majority of the afternoon, until Massa's fast time saw the German pipped by 0.088s.

Morning pacesetter Lewis Hamilton, who will go into qualifying for a three-place grid penalty for disregarding yellow flags earlier today, was fourth quickest in the best of the McLarens, with his team-mate Jenson Button sixth behind Mark Webber's Red Bull.

Force India took 'best of the rest' honours in front of its effective home crowd thanks to Adrian Sutil's seventh place, two positions ahead of team-mate Paul di Resta, as they sandwiched Bruno Senna's Renault. SebastienBuemi completed the top 10 for Toro Rosso.

The Mercedes were further back than usual in 19th (NicoRosberg) and 21st (Michael Schumacher) - the seven-time champion having missed some of the session while an issue was resolved on his car.

There were plenty of small incidents as the drivers explored the track's limits, particularly at Turn 6, and one red flag after Jerome D'Ambrosio went off at Turn 11 and ended up backed his Virgin into the barriers, causing significant damage. He was unhurt and the session quickly resumed.

Petrov also had a spin in his Renault, while Pastor Maldonado dumped his Williams in the Turn 9 gravel early on but was retrieved in time to rejoin the session and complete 24 laps.