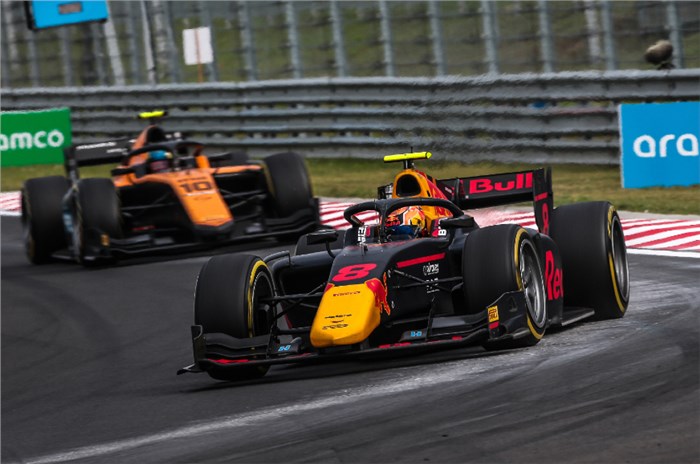 After running into some challenges in the first two rounds in Austria, Jehan Daruvala appears to be finding his footing as he gets acclimated to racing in Formula 2. The third round at the Hungaroring saw the Indian racer score his first points finish in the series, bagging results of 6th and 7th place in the two races over the weekend.

Carlin endured a difficult qualifying session in wet conditions and Daruvala was only able to qualify down in 15th place for the feature race on Saturday. A clutch issue at the start dropped him all the way down to last place on the opening lap. But his tyre choice of starting on the mediums ended up playing into his favour.

As the race went on, it became clear that the alternative strategy of starting on the medium tyres and then switching to softs was the optimal strategy to be on. After nursing his tyres throughout the long opening stint, Daruvala finally pitted for the faster soft tyres on lap 22 of 37. He was able to use the fresher rubber to cut through the pack and gain a handful of positions.

He passed Louis Deletraz, Guanyu Zhou and Callum Ilott in quick succession, pulling off all three overtakes around the outside at the final corner, to seal 6th place. The result meant that he would start Sunday’s reverse-grid sprint race from 3rd position.

Robert Shwartzman – another driver to benefit from the alternative strategy – ended up winning the race ahead of Nikita Mazepin and Mick Schumacher.

The weather may have cleared up just in time for the sprint race on Sunday, but a drying track made for difficult and unpredictable conditions to race in. The start of the race once again proved to be problematic for Daruvala and the Red Bull junior driver dropped down to 9th place at the end of the opening lap.

Daruvala had started the race on soft tyres, but unlike the previous race, it was the medium tyres that appeared to be working better this time around. Pit stops aren’t mandatory in the sprint races, but Carlin opted to pit Daruvala nevertheless to get him on to the medium tyres and he re-joined the field in 17th place.

However, the high degradation meant that almost all the drivers had to eventually pit for fresh rubber, helping Daruvala gain some crucial positions. He ended up finishing the race in 7th place to secure yet another points finish. Meanwhile, Luca Ghiotto held on with deteriorating tyres to win the race from Illot.

After the race, Daruvala admitted that he needs to work on his race starts, saying: “P7 today. Really frustrated at my starts. I really need to work hard over the next couple of weeks on sorting out the start. Apart from that, it was a positive weekend and the pace is there to fight at the front.

After three rounds, Daruvala is 13th in the overall standings. Following a one week break, Formula 3 will head to Silverstone for another double-header and the 21-year-old will be hoping to further improve on his results there.