HRT has become the final team to unveil its 2011 car, as it took the wraps off the new F111 at Barcelona. 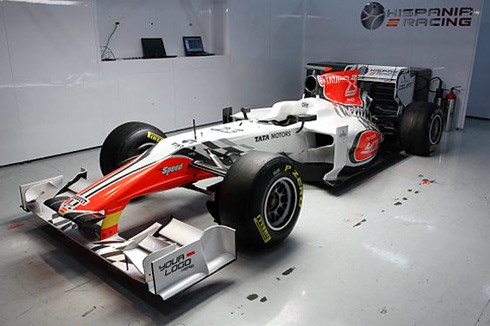 Hispania Racing has become the final team to unveil its 2011 car, as it took the wraps off the new F111 at Barcelona during the penultimate day of winter testing.

After initial plans for the team to work in partnership with Toyota fell through, HRT has built its own new car in a project led by former Williams, BAR/Honda and Red Bull man Geoff Willis.

New drivers Narain Karthikeyan and Tonio Liuzzi are confident that the F111 will be a massive upgrade over last year's troubled car, which was originally created by Dallara but not developed after the turmoil that surrounded HRT's gestation.

The F111 also carries a totally new livery, which has been created by Hollywood designer Daniel Simon. The team will test on Friday afternoon and all day Saturday. It had participated in the previous Valencia and Barcelona tests with its 2010 car on Pirellis to get some initial mileage.