Kimi Raikkonen's Lotus will join Hamilton on the front row ahead of Fernando Alonso's Ferrari. 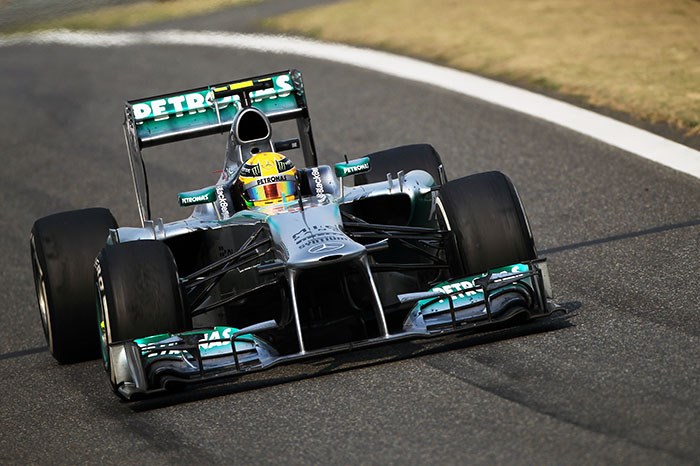 Kimi Raikkonen's Lotus will join Hamilton on the front row ahead of Fernando Alonso's Ferrari.

Championship leader Sebastian Vettel chose not to set a time in Q3 and can start ninth on medium tyres, while most of those ahead must use the fragile softs for their first stint.

His Red Bull team-mate Mark Webber had a disastrous session, as a fuel pressure problem stranded him in Q2.

With the soft tyres only good for one flying lap and expected to quickly fade in the race, qualifying was all about rubber conservation.

Q3 duly became a one-lap shootout in the final minute as all 10 contenders poured on the track at once at the last gasp.

Raikkonen was first to take provisional pole with a 1m34.761s.

Several likely challengers failed to match that, but Hamilton came through on a 1m34.484s to give Mercedes pole at Shanghai for a second straight year.

Alonso ended his run of being outqualified by Ferrari team-mate Felipe Massa as he took third, two places ahead of the Brazilian.

Nico Rosberg split them in the second Mercedes.

Romain Grosjean was sixth for Lotus, followed by Daniel Ricciardo.

The Australian was one of the stars of qualifying as he got Toro Rosso into Q3 for the first time this year, beating team-mate Jean-Eric Vergne by 0.9 seconds in Q2.

Jenson Button joined Vettel in opting for medium and did a slow lap for eighth, while Vettel and Sauber's Nico Hulkenberg chose not to do Q3 flying laps at all.

Webber ended qualifying 14th after a fuel pressure problem forced him to park his car on the circuit in Q2. But the Australian fears he will ultimately end up at the back of the grid if the issue means his Red Bull cannot provide the mandatory fuel sample for the FIA.

Both Force Indias narrowly missed out on the top 10, with Paul di Resta just 0.029s off in 11th. Team-mate Adrian Sutil was behind Sergio Perez's McLaren in 13th.

The tyre issue even neutered Q1, which did not feature any track action until halfway through.

Toro Rosso attempted to get through on mediums, but had to make a late switch to softs as both drivers were at risk of missing the cut.

Jules Bianchi had been ahead of the Toro Rossos before they moved to softs, but had to settle for his usual 19th for Marussia, still comfortably faster than his back of the grid peers.