Gill wins INRC Round 1 at Coimbatore

Defending INRC champ Kadur and co-driver Pai finish second; Round 2 to be held in Chennai from August 26-27. 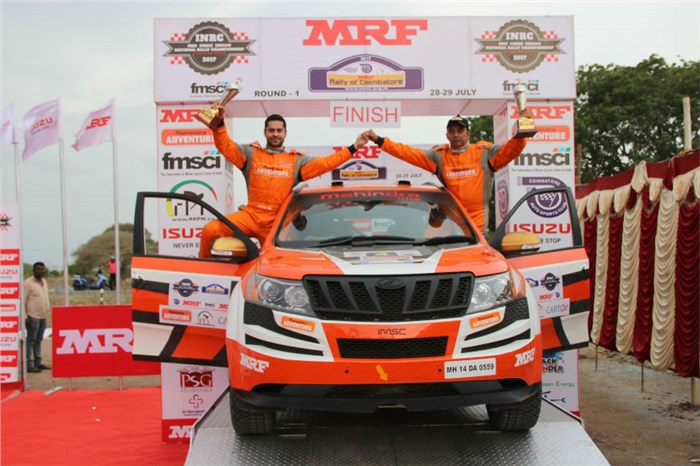 Gill wins INRC Round 1 at Coimbatore.

The 35-year-old racer and co-driver Musa Sherif, who were fourth off the blocks, stormed into the lead in the first stage. The duo drove through the winding gravel roads to round the first leg up in just 12 minutes and 11 seconds, a full 18 seconds ahead of the 24-car field.

Driving for Team Mahindra in a super XUV500, Delhi’s Gill swept the remaining stages, consistently increasing his lead by at least 20 seconds in each stage. He finished the 70-odd kilometres in one hour and thirty-six seconds.

Karna showed immense speed in his Polo but just couldn’t match Gill’s pyrotechnics; he, however, stayed ahead of the pack in the INRC 2 category. Rahul Kanthraj and Vivek Bhatt who finished fifth overall, took the second position, cruising into the park fermé just 3 seconds later.

Dean Mascarenhas and Shruptha Padival claimed the Round 1 honours in INRC 3, finishing fourth in the INRC pecking order.

One of the leading pairs, Arjun Rao and Satish Rajgopal, pulled out in the first stage itself. Five other teams joined them on the DNF list, with the heat playing the culprit. Aroor Vikram and Somayya AG, in fact, had a bad crash and their car literally burnt down; luckily, both the driver and the co-driver escaped without a scratch on their persons.