Gaurav Gill was felicitated for his achievements in motorsport, while 18-year-old Lal Nunsanga took home the coveted ‘Upcoming Motorsports Person of the Year’. 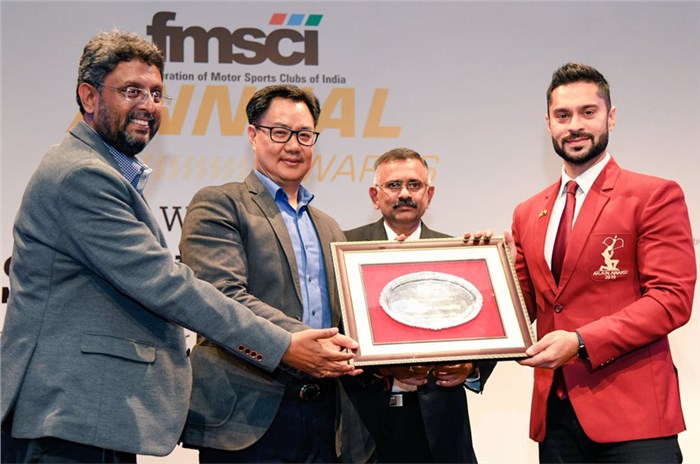 The brightest talents in Indian motorsport were felicitated for their achievements on both the national and international stage at the 2020 FMSCI (Federation of Motor Sports Clubs of India) Annual Awards that were held in New Delhi. Leading the long list of awardees was rally ace Gaurav Gill, who was handed a special award to acknowledge his various achievements in motorsport, including becoming the first motorsport athlete to win the Arjuna Award, winning the Asia Pacific Rally Championship (APRC) thrice, and winning the Indian National Rally Championship (INRC) six times.

18-year-old Lal Nunsanga took home the coveted ‘Upcoming Motorsports Person of the Year’ award. The young racer from Mizoram enjoyed a stellar year of racing in 2019; he clinched the title in the CBR150R category of the MRF MMSC FMSCI Indian National Motorcycle Racing Championship, bagging seven race wins along the way.

Karthikeyan, meanwhile, clinched his maiden Super GT podium finish at Round 6 of the series, at Sugo, and then went on to win the second Super GT x DTM Dream race. Earlier this year, he announced his decision to step away from the Japanese racing series to explore new racing challenges, and could be looking to branch out into the business side of motorsport.

Next up was Yash Aradhya, with the 17-year-old being recognised for becoming the first motorsport athlete to have received the Pradhan Mantri Rashtriya Bal Puraskar. Arjun Maini and Abhimanyu Gautam were honoured for their respective achievements in the Asian Le Mans Series and the FIM Asia Cup of Road Racing. Elsewhere, Aishwarya Pissay’s Bajas World Cup title may have sparked controversy last year, considering she won the title in the women’s category due to a technicality, but she too was honoured at the event, along with other notable female racers like Mira Erda.

Other champions of Indian motorsport across a variety of two-wheel and four-wheel racing series were also felicitated. An indication of just how strong 2019 was for Indian motorsport, over 110 awards were handed out in total. Speaking at the event, FMSCI President J. Prithviraj said: “2019 has been nothing sort of a golden milestone for us. It marked a year where motorsport got much-deserved credit and recognition of the highest order.”

“The future of Indian motorsport has never looked brighter. These are truly exciting times and I am looking forward to seeing where we all can collectively take this sport,” he continued.