In a race of mixed emotions, both Mahindra Drivers lost out on potential top four positions. 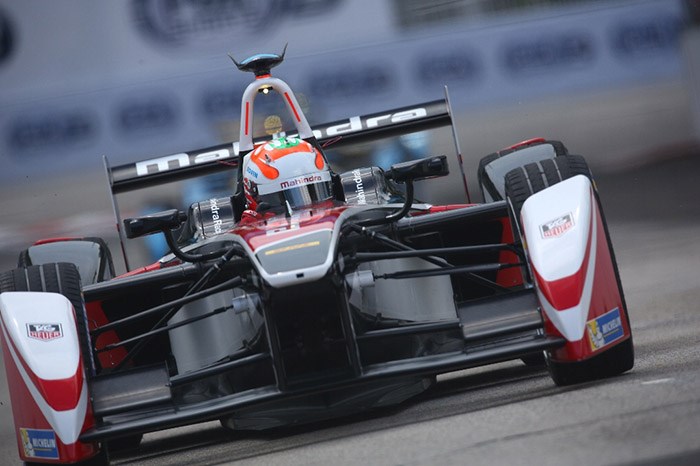 India's Karun Chandhok and his Mahindra Racing Formula E team had a mixed day on the streets of Putrajaya, Malaysia after a pit stop problem cost him a podium position. Chandhok finished in 6th position after fighting back from 11th in an eventful race that saw him running in 3rd position for the first half of the race. Chandhok has moved up to joint 3rd in the Championship after completion of two rounds of the inaugural FIA Formula E series.

It was an eventful day for the Mahindra Racing Formula E team today, in round two of the 2014/15 FIA Formula E Championship. In a race of mixed emotions, both Mahindra Drivers lost out on potential top four positions, with Indian racer Karun Chandhok crossing the line in sixth and Bruno Senna crashing out of fourth place with just a few corners remaining.

Chandhok, who started 5th on the grid, made the most of a slow starting Daniel Abt to make his way into fourth place while Senna also made up a place passing the Abt car. Two separate incidents on the opening lap created the need for the safety car as various debris was cleared from the circuit.

At the restart both Mahindra Racing cars remained in contention with Chandhok holding onto fourth, before making his way into third place by pulling off a great move on pole sitter Oriol Servia into turn 1. Chandhok was in third place putting pressure on 2nd placed ex-F1 driver Jarno Trulli for the first half of the race. Unfortunately a delay in the pits lost Chandhok 14 seconds and positions as he slipped back to 11th place as he exited the pits. Senna meanwhile had also swapped to his second Mahindra car, and was ninth.

Senna was keen to make progress through the field however and made up several positions due to overtakes and drive through penalties for other drivers. Using his Fan Boost, Senna passed Nicholas Prost to take fourth place. Chandhok was also making progress, up to seventh place after passing Daniel Abt.

Senna crashed on the last lap when following third placed man Sebastien Buemi closely and made heavy impact with the barriers while Chandhok meanwhile had done well to recover to sixth place.

Reflecting on his race, Chandhok said, “Unfortunately the pit stop didn’t go too well for us. One of our regular mechanics was taken to hospital yesterday so we’re a man down so it wasn’t quite a slick as normal. If we look at where the time we lost would have put us, I think we would have been easily on the podium. I was running in third place earlier on, feeling comfortable, not taking any risks but the pace was there. I’m driving well and we have a good car so we need to make sure everything comes together in Uruguay.”

Team Principal Dilbagh Gill added, “Again, it’s been a very eventful Formula E weekend with many ups and downs. As in Beijing we showed very good pace, we clearly have a handle on the technical side but it didn’t quite come together this weekend in terms of the podium results we deserved. There are positives to take away; strong pace again and the fantastic support of the fans who supported Bruno again through Fan Boost, for which we are very thankful. We now head to Uruguay confident of better results.”

The Mahindra Racing Formula E team will be back in action in three week’s time for round three of the season at the Punta Del Este, Uruguay.