"When we see the stopwatch at the first qualifying for the first race, then we will know the answer," said Team Principal Stefano Domenicali 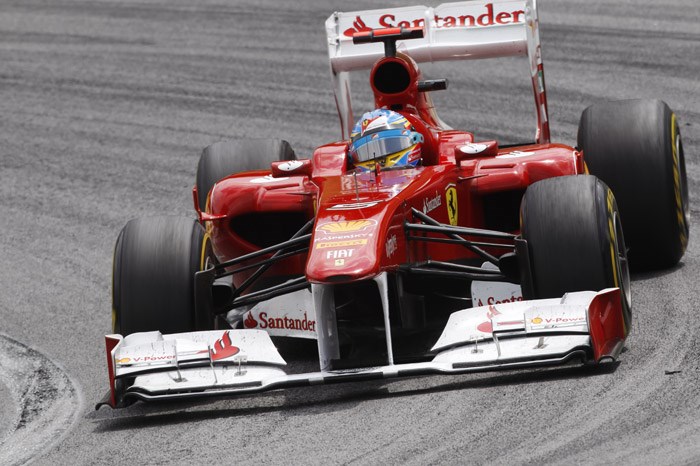 Ferrari is confident that the technical restructuring and staff changes it undertook during a disappointing 2011 campaign are now paying off as it strives to get back on terms with chief rivals Red Bull and McLaren this year.

The Scuderia finished a distant third in the constructors' championship and scored just one win - Fernando Alonso's at Silverstone in July. From early on in 2011 it was clear that Ferrari's 150 Italia had been too conservative a design, struggled to warm up the harder compound Pirelli tyres and its development suffered from poor correlation with the team's wind tunnel data.

But Ferrari team principal Stefano Domenicali says internal restructuring that included the hiring of Pat Fry, who replaced Aldo Costa as technical director last June, resolved a lot of these issues and is now beginning to show results as the team ramps up its assault on 2012.

"When we see the stopwatch at the first qualifying for the first race, then we will know the answer," said Domenicali, "but I see some things that give us optimism that we are doing a reasonable job.

"We try to look ahead and change the organisation in order to make sure in terms of ideas and teamwork in the technical office, the work of the windtunnel and simulation, we are more prepared. I'm optimistic because of this.

"Then, as always, we know that the first result where we compare our job with our main competitors is the first qualifying for the first race. But we are working in the right direction."

In an interview AUTOSPORT conducted with Fry in December, the Englishman himself said that the correlation of data with the windtunnel was improving.

"You are never going to get perfect correlation," said Fry. "It's a constantly evolving thing. But we've learned a lot and we are improving. We are getting better. Even with track testing, you'd want that correlation, but once you can use mathematical modelling to analyse the car and work out what's quicker, that also allows you to make better decisions."

Fry also promised that the design team largely responsible for last year's car had been encouraged to be more adventurous with the 2012 machine.

"The group of engineers will be more creative," said Fry. "They are working a lot better.

"The aero department in particular has been a lot more creative and that's good to see.

Domenicali reckons that regulation stability between 2011 and 2012, should also help Ferrari's recovery. One of the few changes in the rules – the banning of hot-blown diffusers – might play to the team's advantage since it was an area where it struggled both aerodynamically and engine mapping – it's British GP win came when the technology was temporarily banned – compared to Red Bull and McLaren.

"In terms of regulations, what is the difference from last year and the year before? This year, the rules have changed so that the exhaust effect was an area where we were less strong."

Ferrari's president Luca di Montezemolo also thinks the team is now back on the right track.

"We want a competitive car," he said. "I think that Domenicali made some good improvements in the organisation without a revolution. Now we have people in charge of the team answering to Domenicali: Luca Marmorini for the engine, he was born in Ferrari, he went to Toyota for eight years for experience and then he came back. Then we have Pat Fry who is working very well. He is improving the areas in which Ferrari has less experience.

"I don't want a revolution, but I want step by step improvements season after season.”