The German made a superb start from third on the grid, passing Daniel Ricciardo's Red Bull and pole sitter Lewis Hamilton. 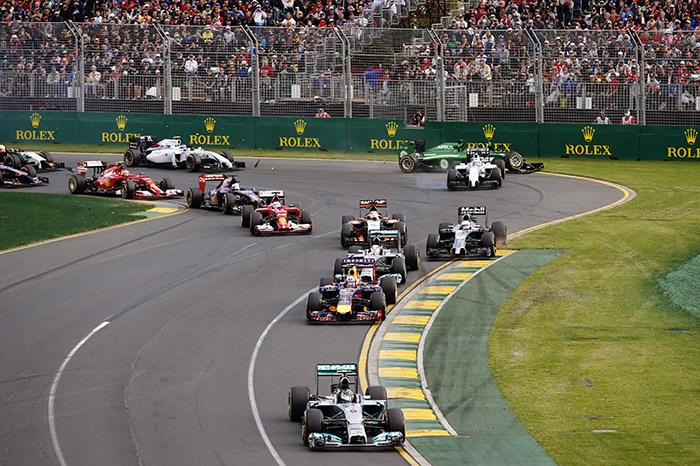 The German made a superb start from third on the grid, passing Daniel Ricciardo's Red Bull and the polesitting Mercedes of team-mate Lewis Hamilton to grab the lead.

Rosberg made the most of the W05's pace advantage to streak away from the field at will and record the fourth grand prix victory of his career, despite an early interruption by the safety car when Valtteri Bottas clipped a wall and shed the right-rear tyre from his Williams.

Rosberg's team-mate Hamilton slipped back to fourth on the first lap as he struggled with an engine problem in his Mercedes.

After initial confusion as to whether he should soldier on, the 2008 world champion retired his W05 into the pits as early as the third lap of 57.

The world champion squad looked to be in desperate trouble in pre-season testing, but made enormous strides with its Renault-engined car in Australia, allowing Ricciardo to score an unlikely maiden podium in his first race for the team.

Things were less rosy for Ricciardo's world champion team-mate Sebastian Vettel, who started out of sequence on the medium tyre after a disappointing result in qualifying on Saturday consigned him to a row six start.

His struggles with a lack of power from his Renault engine continued into the race and he joined Hamilton in retirement after only five laps.

The 2009 world champion started down on row five after his final flying lap in Q2 was spoiled by yellow flags, but he used smart strategy to jump from the fringes of the top 10 to sixth as the safety car came out, then overhaul Fernando Alonso's Ferrari and Nico Hulkenberg's Force India at the second round of stops.

Williams driver Bottas overcame Jean-Eric Vergne's wildly oversteering Toro Rosso and Hulkenberg in the closing stages to finish sixth, but will rue what might have been after a messy race.

The Finn starred in the early stages as he worked the Williams through to the top six from 15th on the grid, but the Finn touched the wall coming out of Turn 10 on lap 11 and broke his right rear wheel.

He avoided suspension damage and pitted for a replacement, before working his way back through the field. A decent points finish was at least some reward for the raid Williams after Felipe Massa was wiped out by Kamui Kobayashi's locked-up Caterham at the first corner on the first lap.

Kimi Raikkonen's Ferrari beat the Toro Rossos of Vergne and F1 rookie Daniil Kvyat as these three completed the top 10.

Perez's Force India, both Saubers, and both Marussias also made the flag as 15 cars in total made the finish.

Jules Bianchi finished eight laps down and unclassified after failing to make it off the grid, causing an aborted start and forcing him to start from the pitlane behind the Lotus of Romain Grosjean.

Grosjean made it to lap 45 before retiring his troublesome twin-tusk E22, while team-mate Pastor Maldonado and Caterham's Marcus Ericsson also stopped out on-track shortly after half-distance.