F1 Miami GP: 5 things to look out for

The Miami GP will be the latest venue to join the F1 calendar from 2022 onwards. Here’s what you need to know about the new US track. 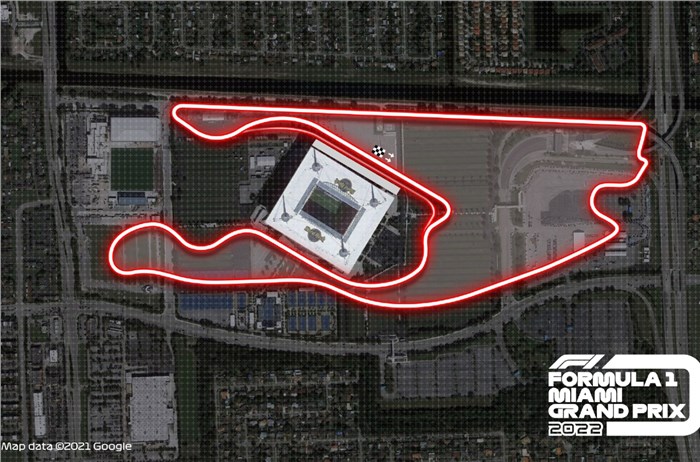 The Miami GP is all set to join the F1 calendar from 2022 onwards, after years of discussions. The championship has released fresh details of the new track layout that will surround the Hard Rock Stadium complex in Miami Gardens.

Keep reading to find out more about F1’s latest venue:

Designed together with Apex Circuit Design, the new Miami racetrack will feature 19 turns, with the Hard Rock Stadium (which in the past has hosted the Super Bowl) at the very centre. The track itself will be 5.41km long, with simulations predicting a top speed of 320kph and an average speed of 223kph.

The track has been woven around the existing infrastructure, with Tom Garfinkel, vice-chairman, president and CEO, Hard Rock Stadium, revealing that “you could walk around the top deck of the stadium and see every corner on the racetrack.” Plans are also in place to use the stadium for spectators and other facilities.

F1 says the track has been designed with “spectacular racing in mind” and has identified two key overtaking spots. The first of these will come at Turn 11, at the end of one of three potential DRS zones. The second spot will be Turn 17 at the end of the longer straight.

For now, the third DRS zone is planned to be situated on the pit straight, so as to give racers a chance to attempt some passes into Turn 1.

The Miami track will operate as a temporary street circuit, similar to Australia’s Albert Park Circuit. But organisers say the layout will resemble that of a permanent track, with small undulations incorporated into the design.

Citing examples, F1 points out: “The main elevation change can be found between Turns 13 and 16, with the track heading over an exit ramp and under various flyovers across uneven ground. For example, the Turn 14-15 chicane has an uphill approach, with a crest in the middle of the chicane and then drops down on exit.”

Set to join the F1 calendar from next year, the Miami GP will be the first F1 race to be held in the state of Florida since 1959. And it’s set to be a permanent fixture for a while, with F1 president Stefano Domenicali confirming the championship has signed a 10-year deal with event organisers. While the exact date of the 2022 Miami GP still has to be confirmed, Domenicali says it will likely take place in the second quarter of the year, so some time in April to June 2022.

Sure, a night race in Miami sounds tempting, but F1 has confirmed that the event will indeed be a day race and the session times will be adjusted to the requirements of the locals, such as working around the school schedule on Friday.