Hamilton came into the 2014 F1 finale with a 17-point lead over Rosberg in the standings, and only needed to finish directly behind his team-mate. 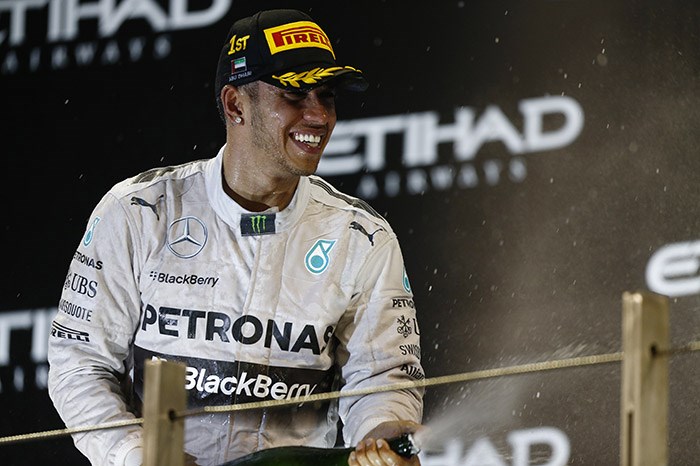 Hamilton came into the 2014 F1 finale with a 17-point lead over Rosberg in the standings, and only needed to finish directly behind his Mercedes team-mate to guarantee the title, regardless of the unpopular double points awarded for this race.

Rosberg secured his 11th pole of the season in qualifying on Saturday, and his title hopes rested on another car coming between himself and Hamilton if he converted that pole into victory.

As it transpired, excessive wheelspin at the start ensured Rosberg lost the lead to Hamilton before the first corner, which consigned him to chasing his rival.

He stayed within a handful of seconds through most of the first half of the race, but suffered an energy recovery system (ERS) failure on lap 24 of 55, which cost him engine power and effectively ended his challenge.

Rosberg tried to manage the problem with help from his Mercedes team, but tumbled down the order and eventually hobbled home a pointless 14th, refusing a suggestion by the team to retire his car in the closing stages as the engine problems worsened and insisting he end his title bid by taking the chequered flag.

Hamilton also lost pace in the middle of the race, though not to the same extent as his team-mate, but recovered sufficiently to beat the charging Williams of Felipe Massa by just 2.5 seconds and clinch the crown with his 11th grand prix victory of the season.

Team-mate Valtteri Bottas recovered from a slow start from third on the grid to record Williams's first double podium finish of the year, while Daniel Ricciardo charged from a pitlane start to fourth following Red Bull's exclusion from qualifying for a technical infringement concerning the RB10's front wing.

Jenson Button produced another strong drive in what could turn out to be the final grand prix of his career to finish fifth for McLaren, ahead of Force India pairing Nico Hulkenberg and Sergio Perez, and the second Red Bull of Sebastian Vettel, which also started from the pits.

Fernando Alonso finished ninth in his final race for Ferrari, a couple of seconds clear of team-mate Kimi Raikkonen, who claimed the final points on offer for 10th place.

McLaren's Kevin Magnussen survived a collision with the Sauber of Esteban Gutierrez, and being forced off the track by Hulkenberg - who was penalised five seconds - on the first lap to finish 11th, ahead of Jean-Eric Vergne's Toro Rosso.

The second Toro Rosso of Daniil Kvyat started fifth on the grid, but retired early on after its Renault engine lost power.