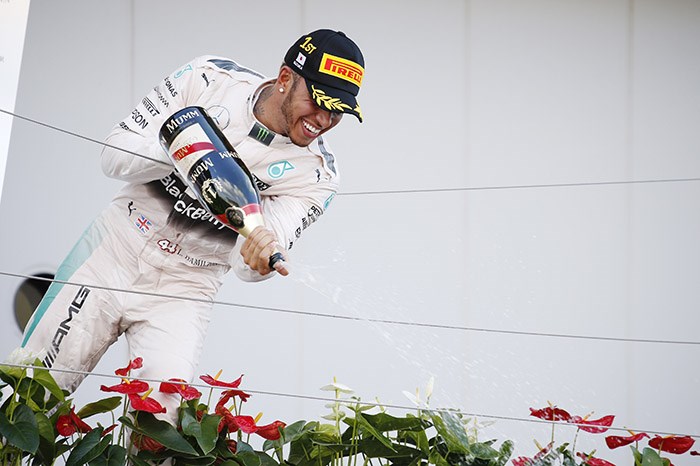 Following the anomaly of Mercedes' struggle for pace in Singapore, around Suzuka normal service was resumed as Hamilton led home Rosberg by 18.9 seconds, their eighth one-two of the year.

The win was Hamilton's 41st, equalling the haul of hero Ayrton Senna, and from his 162nd start, one more than the late three-time champion.

Hamilton is now 48 points clear of Rosberg with 125 available from the remaining five races, with Sebastian Vettel falling 59 points adrift after the Ferrari driver could only manage third.

The key moment came in the opening seconds, as Rosberg and Hamilton ran side by side through the first corners.

With the preferable inside line at Turn 2, Hamilton was able to edge Rosberg aside, leading to the latter running marginally off track, allowing Vettel and Williams's Valtteri Bottas to sweep by into second and third.

Aside from one complaint shortly before his second pitstop after 31 laps about "vibrations so big" that left him "struggling", Hamilton was never troubled through to the chequered flag.

Rosberg limited the damage to Hamilton by passing Bottas on lap 17 before the undercut worked on Vettel 13 laps later come the second round of stops.

Behind Vettel was team-mate Kimi Raikkonen as Ferrari made its own undercut work on Bottas who, from third on the grid at the start, had to settle for fifth.

Team-mate Felipe Massa's race was ruined inside the opening few hundred metres as the passing Daniel Ricciardo's left-rear tyre collided with his own front right.

Both men suffered punctures, with Massa also requiring a new front-wing due to damage sustained on the slow crawl back to the pits.

The Brazilian finished 17th and two laps down, with only Manor duo Alexander Rossi and Will Stevens and late retiree Felipe Nasr behind him.

Sergio Perez was also pitched off the road as the pack avoided the damaged Williams and Red Bull, but recovered to 12th after a pitstop for repairs.

Ricciardo was 15th and a lap adrift, a week after finishing second in Singapore.

Red Bull team-mate Daniil Kvyat - whose car was completely rebuilt following his heavy crash in qualifying, requiring a new chassis, power unit and gearbox - endured a frustrating race and multiple issues as he could only manage 13th.

From 13th on the grid, after serving a three-place penalty for causing a collision with Massa in Singapore, Nico Hulkenberg was a fine sixth in his Force India, gaining ground at the start and then jumping both Lotus drivers at the first stops.

Verstappen had started 17th after serving his own three-place penalty for stopping in a potentially dangerous place in qualifying when his car suffered an electrical failure.

Sainz had his own moment in the race, hitting a bollard on the entry to the pitlane, forcing his pit crew into an unexpected front-wing change. He then lost out in a late battle with Verstappen.

As for McLaren, on Honda's home track, Fernando Alonso could have done no more to suggest he wants either a swift exit from his three-year contract or a dramatic rapid improvement.

Early on Alonso bemoaned his lack of pace, saying "it's embarrassing, very embarrassing", before later labelling Honda's V6 engine as "GP2" standard, followed by an exasperated cry of frustration.