Lewis Hamilton crossed the line on just three wheels after suffering a punctured tyre on the last lap. 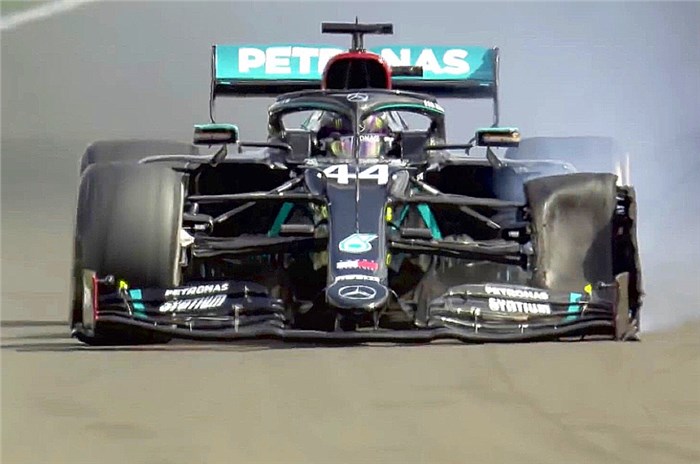 Lewis Hamilton clinched his seventh British GP win in dramatic fashion as the tense final minutes of the race saw him suffer a left-front tyre puncture. This is Hamilton’s third straight victory (after the Styrian GP and Hungarian GP) in the F1 2020 season so far. It also hands him the record for the most victories secured by an F1 driver at a home race, all while having to cross the line on just three wheels.

While the British GP saw two safety car periods, triggered by Kevin Magnussen and Daniil Kvyat’s crashes, out at front it seemed like it would be a fairly straightforward race for Mercedes. Both, Hamilton and Valtteri Bottas seemed to be in a league of their own and had controlled the pace out at front for most of the race.

However, Mercedes started reporting tyre blistering on both cars in the closing stages. With just two laps to go, the British GP was turned on its head when Bottas suffered a deflated tyre on lap 50 of 52. He was able to limp back to the pits, but dropped all the way down to 12th place as a result.

This promoted Max Verstappen to 2nd, but Red Bull decided to err on the side of caution and pitted him for fresh tyres. Just moments later, Hamilton’s left-front tyre delaminated with half a lap still to go and Verstappen around 30 secs behind him. The British racer was ultimately able to hang on and limped past the chequered flag, 5.8 secs ahead of Verstappen.

Just behind, Carlos Sainz appeared to be on course for a 4th place finish when he also suffered a similar tyre issue and he dropped to 13th place as a result. Bottas gained one place to finish 11th overall, but that wasn’t enough for him to secure a point scoring result.

“That was definitely heart in the mouth feeling because I wasn’t quite sure it [his front left tyre] had gone down until I hit the brakes. And then you could see the tyre was falling off the rim. Just driving it trying to keep the speed up, sometimes it will take off and break the wing I was just praying it would get round and it would not be too slow, I nearly didn’t get round the last two corners. But thank God it did. I really owe it to the team, ultimately we should have stopped towards the end once we saw the delamination,” Hamilton said after the race.

After the practice sessions and qualifying, it became apparent that Ferrari was struggling for pace at the high-speed Silverstone circuit. But all the drama out at front gave Charles Leclerc the perfect opportunity to secure his second podium finish of the year with a 3rd place result.

Reflecting on his race, Leclerc said: “It was a very tricky race. We got the best result that we possibly could have today. The car is not running to its potential but we are happy with this podium.”

His Ferrari teammate Sebastian Vettel had a more forgettable race and after struggling with set-up all weekend, was only able to salvage a 10th place finish.

Alexander Albon had a rollercoaster of a race – at one point he was running in last place after the stewards handed him a five second penalty for causing a collision with Magnussen. But the Red Bull driver staged an impressive recovery in the final few laps to finish 8th overall, ahead of Stroll.

All eyes were on Nico Hulkenberg at Silverstone, with the German making his F1 return with Racing Point after Sergio Perez tested positive for COVID-19. However, he couldn’t even make it to the start of the British GP as the team discovered a power unit issue with his car just minutes before the race.

Hulkenberg said that while he was disappointed, the incident was oddly fitting considering what an unpredictable week he’s had. “Somehow it fits into all these crazy days that I’ve experienced, but obviously kind of disappointing for me and the team,” he said.

"Obviously they tried everything but [there was] some sort of power unit issue and we didn’t manage to start the car and get out there, which is obviously disappointing. We’re looking into why, we don’t know that."

Formula 1 will return to Silverstone next weekend for the 70th Anniversary GP. But the series will probably have to implement new tyre rules considering the fact that the tyres allotted for the race will be a step softer compared to the compounds used at the British GP.

As for the standings, Hamilton’s British GP win has helped him extend his championship lead to 30 points from Bottas. Verstappen remains third overall, but he’s just six points behind Bottas.