Hamilton equals Michael Schumacher’s record for the most wins at a single venue; Verstappen fends off Bottas to secure 2nd place. 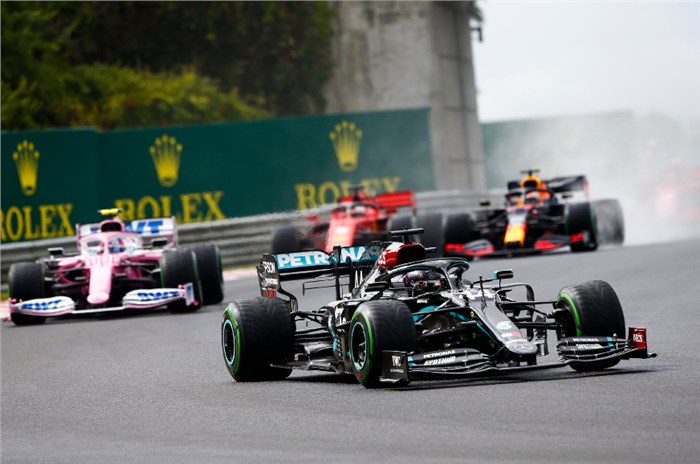 Lewis Hamilton made it back-to-back wins by easing to victory at the Hungarian GP. The British racer already won last week’s Styrian GP and his triumph at the Hungaroring catapults him to the top of the 2020 F1 drivers’ standings.

Max Verstappen and Valtteri Bottas ended up completing the podium. But while it was smooth sailing for Hamilton, it was anything but for the racers behind him as a changing track conditions and high degradation came into play.

Hamilton appeared to be in a class of his own at the Hungaroring. He converted his 90th career pole position into a comfortable victory, 8.7 secs ahead of Verstappen. As a measure of just how dominant the Mercedes driver was, he managed to lap everyone barring the top five. He even managed to cap off a near-flawless weekend by securing an additional point for setting the fastest lap of the race.

With an eighth win at the Hungagoring in the bag, Hamilton has now tied Michael Schumacher’s record for the most number of wins at a single venue.

“Believe it or not, [I’m] still pushing out there, obviously particularly for the fastest lap at the end,” Hamilton quipped after the race.

“Whilst I was on my own for the race it was a different kind of challenge. We had great pace but it couldn’t have been without these guys that were working. We did great pit stops, great strategy and right at the end there because I was managing those mediums was perfect to get on softs and get the fastest lap. I definitely feel round one [In Austria] was multiple different punches that I wasn’t perhaps ready for – but I refocused, which I do every race. I need to try and keep this up.”

For Max Verstappen, the drama started before the race even got underway as the Red Bull driver crashed into the Turn 12 barrier while making his way to the grid on a wet track. The team had only 15 minutes to repair his car, but they pulled it off and Verstappen was able to start the race.

While Hamilton enjoyed a clean run off the line, it was a whole other story for his team mate Bottas. The Finnish driver appeared to initially move before the lights went out, but stopped within his grid slot when he realised his error and then moved slowly off the line. The whole ordeal dropped him from 2nd to 6th place and he had to spend the rest of the race making up for that error.

Bottas battled his way up to 3rd place and caught up to Verstappen in the closing stages of the races. With enough of a gap to Lance Stroll behind him, Mercedes decided to pit Bottas for a second time. Despite being on fresher rubber, the Finn ran out of laps and had to settle for 3rd place.

Speaking after the race, Verstappen said that his 2nd place finish “felt like a win” considering the situation he was in just minutes before the race start. “Not how I wanted it at the beginning. The mechanics did an amazing job to fix the car. To pay them back with second place - I was pleased with that. To be able to split the two Mercedes is good for us,” he added.

Racing Point continue to impress, proving that the RP20 – which has been dubbed the ‘Pink Mercedes’ owing to its resemblance to the 2019 championship winning W10 and has drawn an official protest from Renault as a result – does have what it takes to compete with the big guns.

Lance Stroll wasn’t able to convert his P3 grid position into a podium finish, but he held on to finish in 4th place, ahead of Alexander Albon in the second Red Bull car. However, Albon is facing a potential penalty with Red Bull summoned to the stewards for allegedly drying off his grid slot before the start.

Sebastian Vettel recovered from an early pit stop mishap to secure his best finish of the season so far with a 6th place result. As all the drivers rushed to the pitlane to switch to slick tyres, Vettel was caught out and spent several seconds in his box waiting for traffic to move. Hs team mate Charles Leclerc finished just outside the points in 11th place after being caught out by Ferrari’s decision to put him on the less durable soft tyres early on.

Sergio Perez ended up 7th, ahead of Daniel Ricciardo in 8th place.

Haas’ decision to start the race on full wet tyres left everyone scratching their heads, but the team decided to pit both of its drivers for slicks after the formation lap itself. The move paid dividends for Kevin Magnussen as he was able to fend off Carlos Sainz in the last few laps and secure 9th place.

However, both Haas drivers were handed a 10-second time penalty after the race for receiving aid over the radio on the formation lap, which is in breach of the sporting regulations. This dropped Magnussen to 10th place and Romain Grosjean to 16th place

Pierre Gasly ended up being the only driver to retire from the race, as he pulled into the pits with an issue on his newly-fitted power unit.

After the first three races, Hamilton has replaced Bottas at the top of the standings and currently leads the drivers’ championship by five points (Hamilton with 63 points and Bottas with 58). Verstappen has climbed to 3rd place overall with 33 points – 25 points adrift of Bottas. Following a weekend off, F1 will now make its way to Silverstone for a double-header on August 2 and 9.