Hamilton moves ahead of Schumacher on the list of all-time F1 wins; Bottas and Verstappen complete podium. 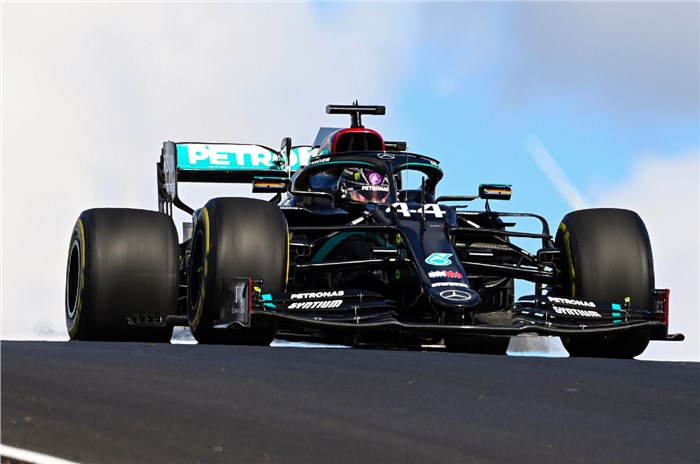 Lewis Hamilton took a commanding win at the 2020 Portuguese GP, which saw him clinch his 92nd F1 victory. With this, Hamilton has edged ahead of Michael Schumacher to become the most successful F1 driver ever in terms of wins.

Despite showing some early promise, Valtteri Bottas’ victory bid faded as the race progressed and he finished a hefty 25.592 secs behind Hamilton in 2nd place. Max Verstappen rounded out the podium in 3rd place.

The first-ever F1 race at Potugal’s Portimao circuit produced some exciting moments. The drivers were left struggling for grip as the rain briefly hit the track, just in time for the race start.

Bottas initially moved into the lead as Hamilton dropped down to 3rd place after being passed by McLaren’s Carlos Sainz. But both Mercedes drivers were struggling to get their medium tyres upto temperature, and Sainz – who was running on soft tyres at the time - took advantage of this to take the lead a lap later.

Once their tyres were fired up, though, both Mercedes drivers wasted no time passing Sainz.

While Bottas was initially able to pull away out at front, Hamilton soon caught up to him and was able to use DRS to take the lead on lap 20. From there on, the British driver was in a league of his own.

Bottas had a perplexing weekend in Portugal; he topped every single session except for the two that mattered the most – the final part of qualifying and the race.  Desperate to have a crack at victory, at one point he’d even asked the team to switch him to soft tyres at the end of the race. But he later admitted that it wouldn’t have made much of a difference.

This allowed Hamilton to cruise past the chequered flag as he made sporting history, two weeks after he equaled Schumacher’s record at the Eifel GP. His winning margin of 25.592 secs is the biggest one so far this season.

Speaking after the race, Hamilton admitted that the reality of his achievement hadn’t yet sunk in.  “I owe this to the team here and those back at the factory. It’s been such a privilege to work with them,” he said.

“I could only have ever dreamed of where I am today. It’s going to take some time for [the record] to fully sink in, but I was still pushing flat-out coming across the line. I’m still very much in race mode mentally. I can’t find the words at the moment.”

Perez fights back to 7th

Despite some early-race drama, Red Bull Racing’s Verstappen had a relatively unchallenged run to 3rd place. Charles Leclerc followed up his impressive qualifying form to finish 4th for Ferrari. After suffering a rather difficult handful of races, the Italian squad’s latest round of updates seems to be doing their job.

A chassis change following his FP2 fire appeared to further boost Pierre Gasly’s form as he piloted his AlphaTauri car to a 5th place finish, ahead of early race leader Sainz.

Sergio Perez pulled off an incredible recovery drive to secure 7th place. The Racing Point driver spun around on the opening lap after making contact with Verstappen. He had to pit to fix the resulting damage and dropped all the way down to last place.

But the Mexican – who yet doesn’t have a race seat confirmed for 2021 – steadily fought his way up the order. He passed Gasly and Sainz in the closing stages to take 7th place.

The Renault pair of Esteban Ocon and Daniel Ricciardo finished 8th and 9th respectively. Meanwhile, Sebastian Vettel slotted into 10th place, securing his first point since the Tuscan GP over the month ago.

With just five races to go, Hamilton has extended his championship lead to a massive 77 points from his teammate Bottas.

Bottas’ 2nd place finish does, however, give him some breathing room as he’s now 17 points ahead of Verstappen in the championship.

The Emilia Romagna GP is next up on the calendar on November 1, as F1 heads to Imola for the first time since 2006. F1 will trial a two-day race format at the venue, with just one practice session followed by qualifying and the race.