Valtteri Bottas took a comfortable victory at Sochi after Lewis Hamilton was handed two penalties for a practice start infringement. 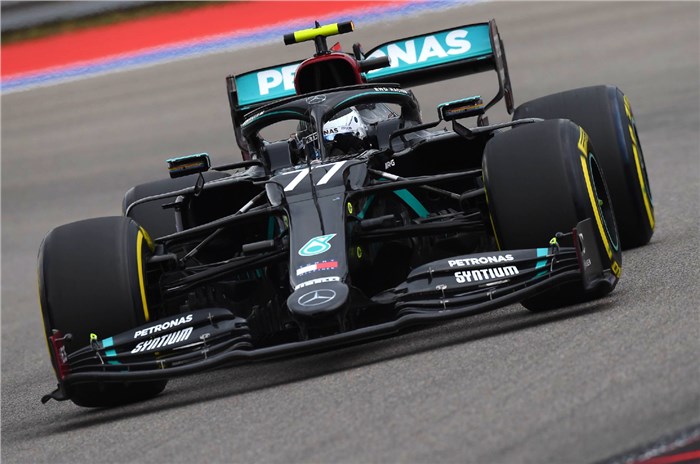 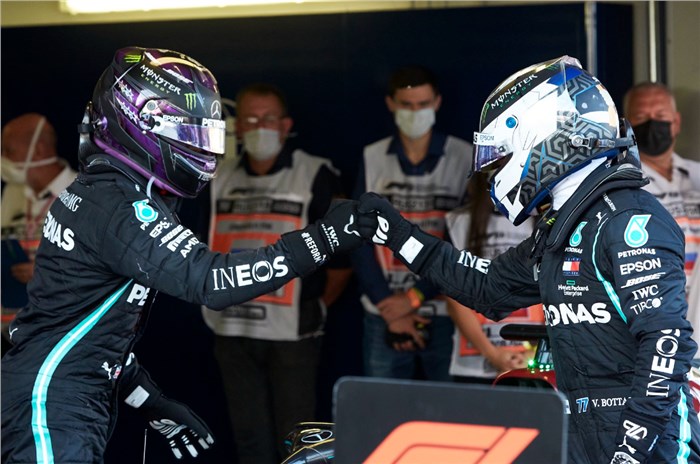 Valtteri Bottas made the most of his Mercedes team mate Lewis Hamilton’s penalty to win the 2020 Russian GP. Max Verstappen finished 7.729 secs adrift in 2nd place. Meanwhile, Hamilton was denied the chance to equal Michael Schumacher’s record for the most wins in F1, and had to settle for 3rd place.

Hamilton was the man to beat at Sochi. But things went awry for the British driver before the race even started, with the stewards investigating him for making his practice start outside the designated area.

The Sochi circuit’s layout always makes for interesting starts, with the long run to the first corner providing plenty of opportunities for overtaking. Starting from 3rd on the grid, Bottas caught a good slipstream, quickly passed Verstappen and looked set to pass Hamilton. However, he couldn’t make the move stick at the first braking zone and Hamilton held on to the race lead. Speaking after the race, Bottas revealed that he was distracted when an insect hit his visor.

The safety car was briefly brought out after Carlos Sainz and Lance Stroll crashed out on the opening lap. But Hamilton enjoyed a strong re-start and seemed to be in the perfect position to take yet another dominant race win. However, he was slapped with two separate 5 sec penalties for his practice start infringements and this spelled the end of his victory bid.

Hamilton pitted on lap 17 to serve both his penalties collectively and dropped all the way down to 11th place as result. The early pit stop also meant that he had to spend a significant portion of the race managing his tyres, and he could only recover to finish 3rd.

Bottas held a firm grip on the race lead thereafter and went on to take an unchallenged victory at the Russian GP – the same venue where he scored his maiden F1 win in 2017.

The win couldn’t have come at a better time for the Finnish driver. His last win came at the 2020 F1 season-opening Austrian GP, and after the Tuscan GP he had candidly expressed his frustration at repeatedly losing out to Hamilton.

“For sure, it’s nice to get a win again, it’s been a while and yeah, definitely good,” said Bottas.

"I need to try and keep the momentum again to squeeze a bit of points against Lewis. It’s still quite a few races to go – it’s just never enough. I’ll keep pushing and never give up and we’ll see how it ends up.”

Racing Point’s Sergio Perez secured a strong 4th place result after what was a relatively quiet race for the Mexican. Renault’s Daniel Ricciardo was given a 5 secs penalty for not running through the bollards after going off the track at Turn 2. After being informed about the penalty, the Australian hit back with a simple “OK, I’ll drive faster”. He made good on that promise and ended up finishing 5th.

Pierre Gasly made the most of his late stop and used the fresh rubber to fight his way up to 9th place. After starting down in 15th place following a gearbox change, Alexander Albon could only manage a 10th place finish for Red Bull Racing.

Having secured his second win of the season, Bottas has closed the gap to his team mate by a margin. But Hamilton still leads the 2020 F1 champion by a healthy 44 points.

Max Verstappen holds on to 3rd place overall, 33 points ahead of Bottas.

After another two-week break, F1 will head to the Nurburgring for the 2020 Eifel GP on October 9-11. The last time an F1 race was held at the venue was all the way back in 2013 and the forecasted cold temperatures should definitely make things interesting.