Mercedes locks out the front row for the 2020 F1 season opener, with Bottas on pole ahead of Hamilton. 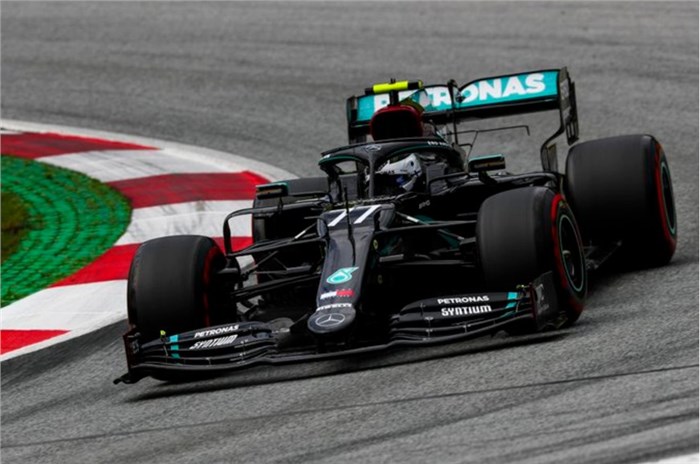 Valtteri Bottas survived a wild off track moment to secure pole position in qualifying for the season-opening Austrian Grand Prix ahead of team mate Lewis Hamilton, who completed a dominant front row lockout for Mercedes.

The Finnish driver lapped the 4.3-kilometre long Red Bull Ring track in 1min 02.939 secs, a new track record, before flying off the circuit in the session’s dying seconds, squandering what would have been an even faster final attempt. But it was still good enough to beat Hamilton, the only other man who could have beaten him on an imperious afternoon for Mercedes, by a mere 0.012 seconds.

Max Verstappen, (winner in Austria the last two years) who will start on a more durable tyre than his Mercedes rivals, was third for Red Bull but over 0.538 seconds adrift.

Saturday’s effort netted Bottas his 12th career pole and third in Spielberg. The track, somewhat talismanic for the Finn, is also where he took the first pole of his Formula 1 career.

“I’ve missed these feelings, the qualifying shakes, something special when you push the car to the limit,” said Bottas, who like his rivals last took part in a qualifying session at the Abu Dhabi Grand Prix last December after the COVID-19 pandemic forced a delay to the start of the 2020 season.

“We’ve been preparing for this for a long time. Our team… amazing job, we seem to be in our own league,” added Bottas, mask on, in a socially-distanced interview on the grid.

Hamilton, gunning for a record-equalling seventh title this season, had looked favourite for pole in his new black-liveried Mercedes sporting the message ‘End Racism’ in support of the Black Lives Matter movement.

The Briton, who has won just once at the Red Bull Ring and also scored his last retirement at the track back in 2018, had led a practice clean sweep but was unable to take advantage of Bottas’ off-track moment to overhaul the Finn.

“It’s a great job by Valtteri, this is a great start to the season and I’m happy to be here,” said the 35-year-old who was running right behind his Bottas when he went off.

“I came out of Turn 4 and there was a big puff of dust. I didn’t know where the car was or anything like that.  I managed to see that Valtteri was just about to come back on the track and fortunately it didn’t really affect the lap and he kept his position.”

Even as Mercedes stamped their authority on the field, old rivals Ferrari struggled.

Charles Leclerc, who started from pole in Austria last year, was only seventh. Team-mate Sebastian Vettel, set to leave the team at the end of the year, failed to even make it through to the final phase of qualifying and will start 11th.

The Italian team had expected to be on the back foot after discovering problems with their aerodynamic concept in testing. The latest updates addressing the problem are not due until the third race of the season in Hungary

“I was not so happy with the car… but we’ll see,” said the German four-time champion who celebrated his 33rd birthday on Friday.

“Tomorrow is a different picture. I think in race trim we are always better and I think we’ll be up there to make up some ground and score some good points.”

McLaren best of the rest

Lando Norris was an impressive fourth for McLaren ahead of Verstappen’s Red Bull team mate Alexander Albon. Sergio Perez was sixth for Racing Point, a strong showing for a car dubbed the ‘Pink Mercedes’ for its resemblance to last the car the champions fielded last year.

Carlos Sainz, who will replace Vettel at Ferrari next year, was eighth.  Lance Stroll was ninth for Racing Point while Daniel Ricciardo, taking Sainz’ place at McLaren next season, rounded out the top ten.

The drivers last competed in a race at the Abu Dhabi Grand Prix in December. Still there was no rustiness and no major incidents.

There were no crowds at the Red Bull Ring, the first time a race has been held behind closed doors. Teams were also all operating in bubbles with face masks mandatory at the track and strict social distancing rules in force.

Media presence was also limited to a handful of select journalists, with all interviews conducted virtually and no journalists allowed into the paddock.