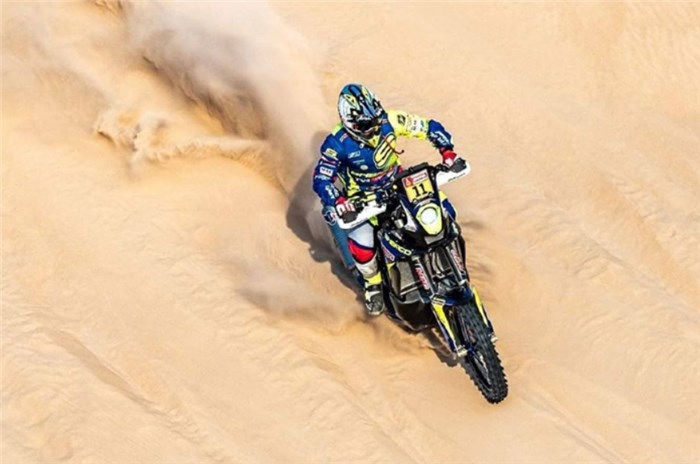 As the 2020 Dakar Rally nears its conclusion, Stage 10 of the rally was cut short due to poor weather. Citing “strong winds”, event organisers decided to halt the stage after 345km to ensure the safety of the competitors. Further increasing the challenge was the fact that this stage, which was originally slated to run for 534km, was a Marathon Stage. This means only the competitors racing in the rally are allowed to work on their vehicles since the participation of team or assistance crews is prohibited.

With Harith Noah, Johnny Aubert and Lorenzo Santolino out of the running, Adrien Metge is the only rider carrying the flag for Sherco TVS. The French rider ended up hurting his back while jumping a dune, but continued to complete the stage in 29th place. The result was enough for him to hold on to 12th place in the overall standings.

Harith Noah carries on competing for individual stage results under the Dakar Experience class. Stage 10 ended up being a challenging one for the Indian rider, who made a navigational error and got lost just before the 345km waypoint. Nevertheless, he was able to finish in a respectable 32nd place.

Joan Barreda may have started off his 2020 Dakar Rally campaign more cautiously, but the Honda rider has been picking up the pace this week and finally secured his first stage win this year. This makes Barreda the seventh different rider to win a stage this year in the bike category. Ricky Brabec finished the stage closely behind in 2nd place and has now further stretched his overall lead to a relatively comfortable 25min.

Over in the car category, the stage was stopped after just 223km. After losing some ground in the overall standings yesterday, Carlos Sainz returned in top form to bag this fourth stage win this year. His closest rivals Nasser Al-Attiyah and Stephane Peterhansel lost a chunk of time as they got lost trying to find the 223km waypoint. As a result, Sainz has now opened up his lead to just over 18min from Al-Attiyah.

Fernando Alonso damaged his Toyota Hilux after suffering a double roll just 2km into the stage. He then had to continue the rest of the stage without a windscreen. Ahead of Stage 10, the two-time F1 world champion stood in 10th place overall, but the incident has now dropped him to 14th place in the standings.