Rosberg found himself having to defend from Vettel during the first and second stints at Shanghai as Hamilton controlled the pace at the front. 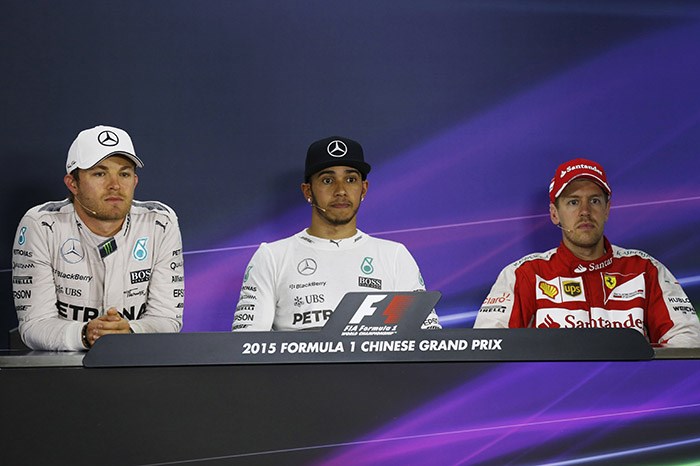 Rosberg found himself having to defend from Vettel during the first and second stints at Shanghai as Hamilton controlled the pace at the front.

Having complained over the radio that Hamilton was making his life difficult by not pushing hard enough and holding him up, Rosberg spoke out against his team-mate's tactics after the race finished.

"It's now interesting to hear from you Lewis that you were just thinking about yourself with the pace at the front," he said, sitting alongside Hamilton in the press conference.

"Unnecessarily, that was compromising my race, because driving slower than was maybe necessary at the beginning of stints meant Sebastian was very close to me.

"That opened up the opportunity for Sebastian to try that early pitstop to try and jump me, and then I had to cover him.

"First of all it was unnecessarily close with Sebastian and also it cost me a lot of race time as a result, as I had to cover him.

"And my tyres died at the end of the race because my stint was so much longer.

"So I'm unhappy about that."

Hamilton was unmoved by Rosberg's complaints and insisted that he was only thinking about his own performance when he was conserving his tyres.

"It's not my job to look after Nico's race," he argued.

"My job is to manage the car and bring the car home as healthy and fast as possible.

"That is what I did.

"I didn't do anything intentionally to slow any of the cars up. I just focused on myself.

"If Nico wanted to get by he could try, but he didn't."