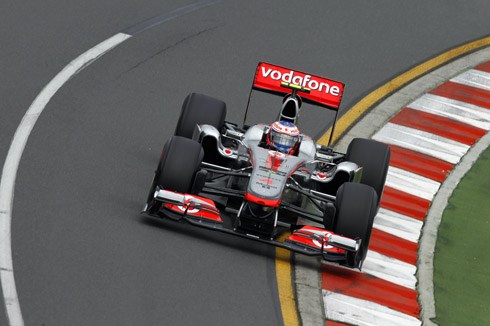 After pre-season tests that left everyone dubious of McLaren's pace- the team managed to defy those perceptions by topping the times in the second free practice session for the Australian Grand Prix as Jenson Button and Lewis Hamilton proved the only men to break through the 1m25s barrier.

The session, which was run under race conditions for the last 30 minutes to test out the new overtaking zone, saw most of the fastest running take place, predictably, just before the hour mark when everyone tried the soft Pirelli 'Option' tyre.

It was during this period that first Hamilton posted a 1m25.854s, and then Button improved upon it to go 0.132s faster still. Whether or not McLaren's pace is a true measure of the overall picture remains unclear however, for Red Bull's drivers, who dominated session one, were instructed not to use their adjustable rear wings for much of the session.

In the end, Sebastian Vettel and Mark Webber were unleashed, once they got on to the Option tyres, but neither could match Fernando Alonso's Ferrari, which ended the session third.

Michael Schumacher improved to sixth fastest in the Mercedes, having been fastest of all for a while. Felipe Massa, one of several drivers to run off-track during the session, was seventh.

Mexican rookie Sergio Perez was an impressive eighth fastest on his first grand prix day for Sauber, outpacing the sport's most experienced driver Rubens Barrichello, who was ninth for Williams - another to test the gravel run off at Turn 3.

Nico Rosberg completed the top ten for Mercedes ahead of Jaime Alguersuari's Toro Rosso and Vitaly Petrov in the Renault.

Another rookie, Paul di Resta managed to outpace his Force India team-mate Adrian Sutil in 16th, while Pastor Maldonado was 18th on his first practice day for Williams.

The session wasn't a walk in the park for the new team as both Lotus cars were the best part of five seconds off the pace, while the Virgins reduced the deficit to front to just over six seconds. However, the danger of sitting out of the race still looms large given the 107 percent qualifying rule.

HRT announced early in the session that it intended to complete installation laps only, did manage to get Tonio Liuzzi out on track with two minutes remaining while Narain Karthikeyan was still unable to hit the track.