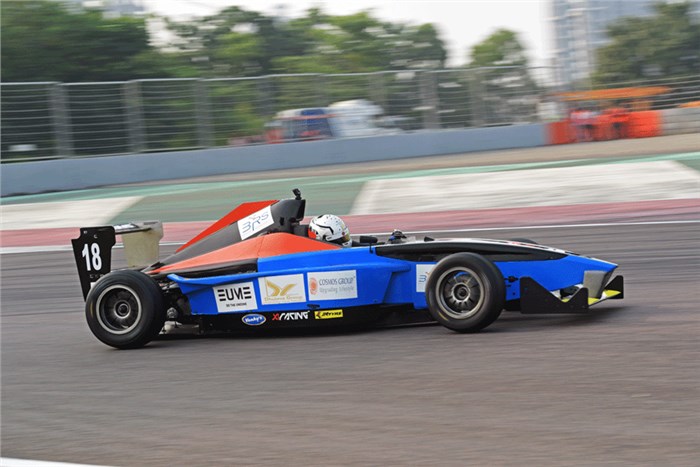 Bangalore Racing Stars have so far dominated at the inaugural round of X1 Racing, with the pair of Arjun Maini and Oliver James Webb winning both the races on Day 1.

The X1 Racing league kicked off its inaugural season with its first round currently underway at the Buddh International Circuit (BIC) in Noida. Team Bangalore Racing Stars ended up dominating the opening day of racing with the pair of Arjun Maini and Oliver James Webb winning both the races. Their teammates, Nayan Chatterjee and Michelle Gatting topped off a successful day for the team by finishing on the podium for Race 2. Earlier in the day the pair had finished Race 1 in 4th place.

Mumbai Falcons were another team that impressed, finishing both the races on the podium. Karthik Tharani and Mikkel Jensen finished Race 1 in 3rd place, while the pair of Kush Maini and Pippa Mann completes Race 2 in 2nd place.

As a brief recap, the X1 Racing League’s races see two drivers share a car for a race. Rather than stopping to change tyres, the pit stops instead see drivers swapping positions with their teammates. Each team currently comprises of five drivers and fields two cars. You can read more about the individual team compositionhere.

The X1 Racing League races were held alongside the final round of the 2019 JK Tyre National Racing Championship. In the Gixxer Cup, a DNF by previous points leader, Pune’s Tanay Gaikwad, saw the championship come down to the wire with just two points separating the leader. The opening Gixxer Cup race for the weekend was won by Syed Muzammil Ali, catapulting him to the top of the points chart with 56 points. Rounding out the remainder of the podium were Sanjeev Mhatre and AmulAngadi in second and third place, respectively.

In the LGB Formula 4 category, Day 1 witnessed two races with the results leaving the race for the championship down to the wire. While Vishnu Prasad had taken the lead on the points charts at the end of Round 3 a few months ago, a strong showing by Raghul Rangaswamy in both races saw him equal Vishnu - at 73 points - on the championship table. Raghul placed second in race one, with Diljith TS taking the checkered flag, and third in race two, with Ashwin Data claiming first place.

Moving to other results, in the 1000cc Superbike Cup, Bhumik Lalwani and Dilip Lalwani from Mt Abu claimed first and second place, respectively while third place was bagged by Simranjeet Singh.

Day 2 will see the cup decider for the Gixxer Cup and LGB Formula 4 with both classes set to feature a race apiece. There's going to be a lot more action from X1 Racing too, with two more races scheduled. Stay tuned.