Raikkonen's pacesetting lap of 1m34.154s in his Lotus came just after the halfway point. 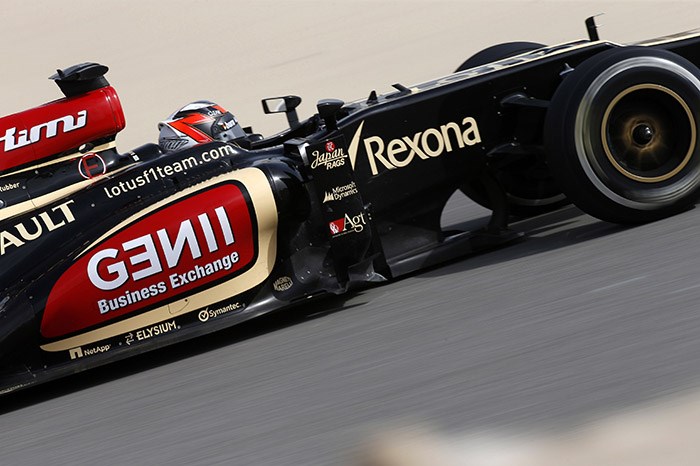 Kimi Raikkonen edged out the Red Bulls for the fastest time in second Friday practice for the Bahrain Grand Prix at Sakhir.

Raikkonen's pacesetting lap of 1m34.154s in his Lotus came just after the halfway point.

It could have been faster still, as the Finn ran wide at the final corner on the way to the flag. Yet even with that slip, Raikkonen's pace was sufficient to edge him 0.030 seconds of Mark Webber, who had been in front for the preceding 20 minutes.

Raikkonen then set an encouraging pace on his later long run, although he was keen to come in earlier than Lotus wanted him to as his tyres faded.

Sebastian Vettel completed the top three in the second Red Bull, a tenth behind his team-mate.

After his fastest time in practice one, Felipe Massa had some minor adventures on the way to sixth. Fernando Alonso was fourth.

Between them, Paul di Resta repeated his excellent morning pace and kept Force India in the top five.

Romain Grosjean was six places and 0.477s behind his team-mate Raikkonen in seventh.

Neither McLaren made it into the top 10, Jenson Button and Sergio Perez ending up 11th and 13th.

Just a day after saying he had learned an important lesson from his Chinese GP collision with Sutil, Esteban Gutierrez was in the wars again as he banged wheels with Charles Pic as he tried to pass the slower Caterham. The Sauber had to limp back to the pits with a puncture.

Pic's car was unscathed, and he got within half a second of Gutierrez and Valtteri Bottas's Williams in the final results.

The Frenchman was the best of the backmarker group, just ahead of the Marussias of Max Chilton and Jules Bianchi, as the the Briton outpaced his team-mate for the first time. Bianchi had sat out morning practice in favour of third driver Rodolfo Gonzalez.