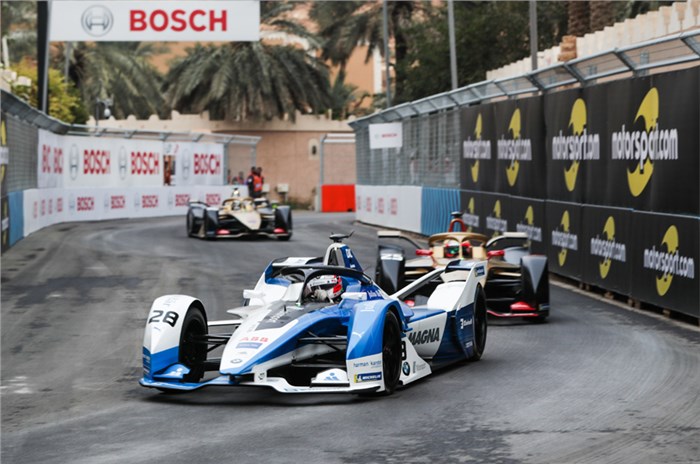 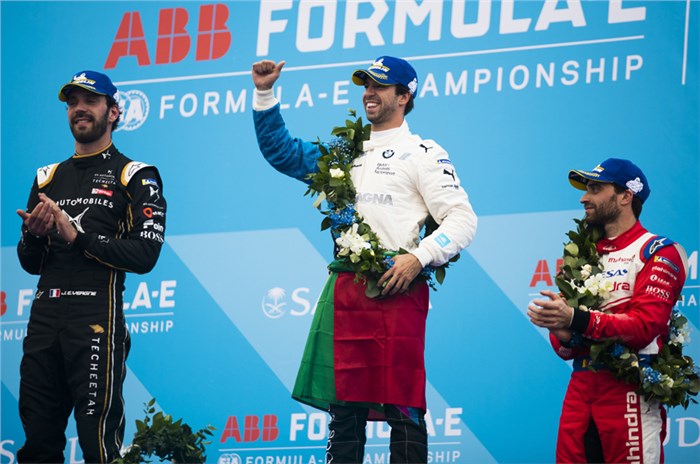 After initially overshooting his grid slot, pole-sitter da Costa had his car lined up pointing toward the outside wall at the start, but he managed to hold on the lead, off the line. Behind him, Sébastien Buemi passed José María López around the outside of the first corner to slot into 2nd. However, the yellow flags were out soon as Edoardo Mortara went into the barriers at the official Turn 1.

As da Costa consolidated his lead, Buemi started slipping down the order by lap 9 with both Techeetah drivers – Vergne and André Lotterer – catching up to him and passing him in quick succession. Vergne then started closing the gap to da Costa; the top two ran nose-to-tail through lap 14 before Vergne moved into the lead – again going around the outside of Turn 18, despite da Costa's fierce defence.

Just when it seemed like Vergne was in a good position to win the race, both he and his team-mate Lotterer were handed drive-through penalties for going over the maximum permitted power while using regeneration, which dropped them back into the pack. Felipe Massa, Gary Paffett and Alexander Sims were also handed drive-through penalties for the same offence.

This handed the race lead to da Costa, once again. López and Mahindra Racing’s Jérôme d'Ambrosio also benefitted from the penalties, shaking up the order; both were up to 2nd and
3rd place respectively, by lap 24. The pair switched places at the end of that lap as López went through the attack mode zone but failed to activate the system.

By this stage, Vergne ran 5th, with Lotterer at 7th and the pair quickly surged back towards the front. Vergne took 4th from López, who appeared to miss activating his attack mode again. However, the Dragon driver stopped with a broken left-rear suspension on the next lap, bringing out the safety car.

Just before the safety car came in, da Costa and Vergne took their second attack mode activations, with the leader immediately pulling clear of d'Ambrosio. Vergne took 2nd as he shot up the main straight on lap 30, and although he closed in on da Costa, the Portuguese driver held on to win by 0.4secs and claimed his first Formula-E victory since the 2014-15 season.

Mahindra Racing may have had a disappointing start to the race, with Felix Rosenqvist stopping early on, but the team ultimately secured a podium finish with d’Ambrosio finishing in 3rd place. Mitch Evans ended the race in 4th place, ahead of Lotterer, Buemi and Formula E rookie Oliver Rowland.

The Audi duo of Daniel Abt and Lucas di Grassi – who started 18th on the grid after having his best time deleted in qualifying – finished 8th and 9th, respectively. Nelson Piquet rounded off the top 10, ahead of the Virgin Racing drivers Sam Bird and Robin Frijns, who also lost their best qualifying times for the same power infraction as di Grassi.