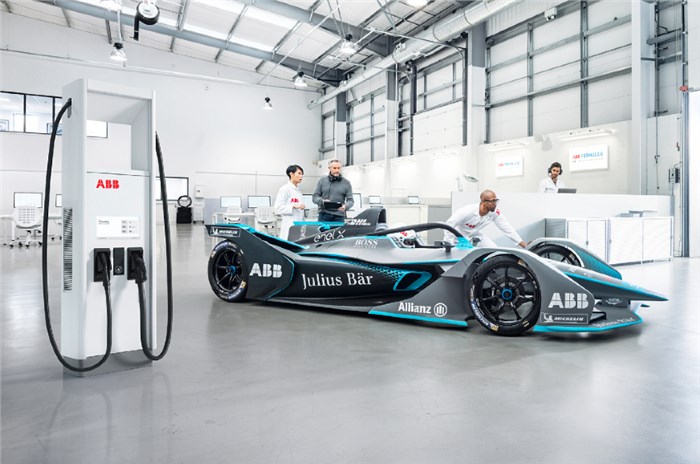 Formula E’s Gen3 cars, which will be introduced from the 2022/23 season, will use bespoke chargers provided by Swiss technology major ABB. This move sees the company further reinforce its partnership with the all-electric racing series; it’s been the series’ title partner since 2018 and is also the official partner of the Porsche Formula E team.

As per the new technical brief, Formula E’s Gen3 cars will be 120kg lighter and will also receive a power boost to 350kW (up from the current 250kW maximum power). The new rules will also see the introduction of rapid charging, which could lead to the return of mid-race pit stops.

Together with engineers from Formula E and the series’ governing body, the FIA, ABB Electrification’s engineers are working on developing an “innovative and safe solution” for charging the lighter, faster and more energy-efficient Gen3 cars. These chargers will be portable units that can charge two cars simultaneously and will be adapted to meet the needs of the racing environment.

Formula E currently uses DC fast chargers provided by Enel X, while ABB builds the chargers for the Jaguar I-PACE eTrophy series. However, just recently, Jaguar decided to pull the plug on the latter, citing the fallout resulting from the ongoing COVID-19 pandemic as a reason.

While announcing this new partnership, ABB Electrification’s President Tarak Mehta highlighted how Formula E plays a crucial role in the company’s race-to-road technology development. “The ABB FIA Formula E Championship is more than a race – it is our test-bed for innovative electromobility technologies, driving development to the production line of electric vehicles and ultimately contributing to a cleaner environment for all,” said Mehta.

“As Formula E builds on the first successful phase of our partnership with ABB, we are delighted to extend our relationship through a deeper level of integration in Gen3,” added Jamie Reigle, Chief Executive Officer of Formula E. “ABB will provide critical charging technology that will improve the racing product and showcase the potential of enhanced charging capabilities for electric vehicles.”

Formula E is all-set to resume its current 2019/20 season next month, with a six-race finale at Berlin’s Tempelhof Airport. The series had already completed five races prior to the suspension, and the trip to Berlin will take the total number of races held this season up to 11.