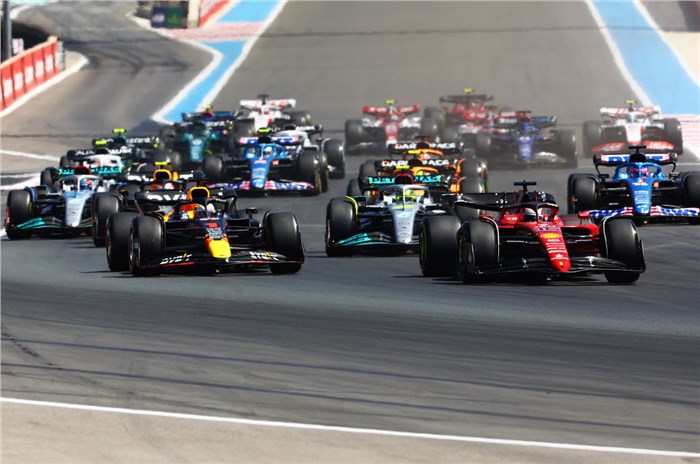 The 2022 Formula 1 season wrapped up at Abu Dhabi, and with that the sport bids goodbye to some fan favourites like Sebastian Vettel, Daniel Ricciardo and even Mick Schumacher.

The focus now shifts to 2023. With Williams confirming American driver Logan Sargeant, we now have the last piece of the puzzle that’s the 2023 driver grid. Let’s take a look at who is driving where. 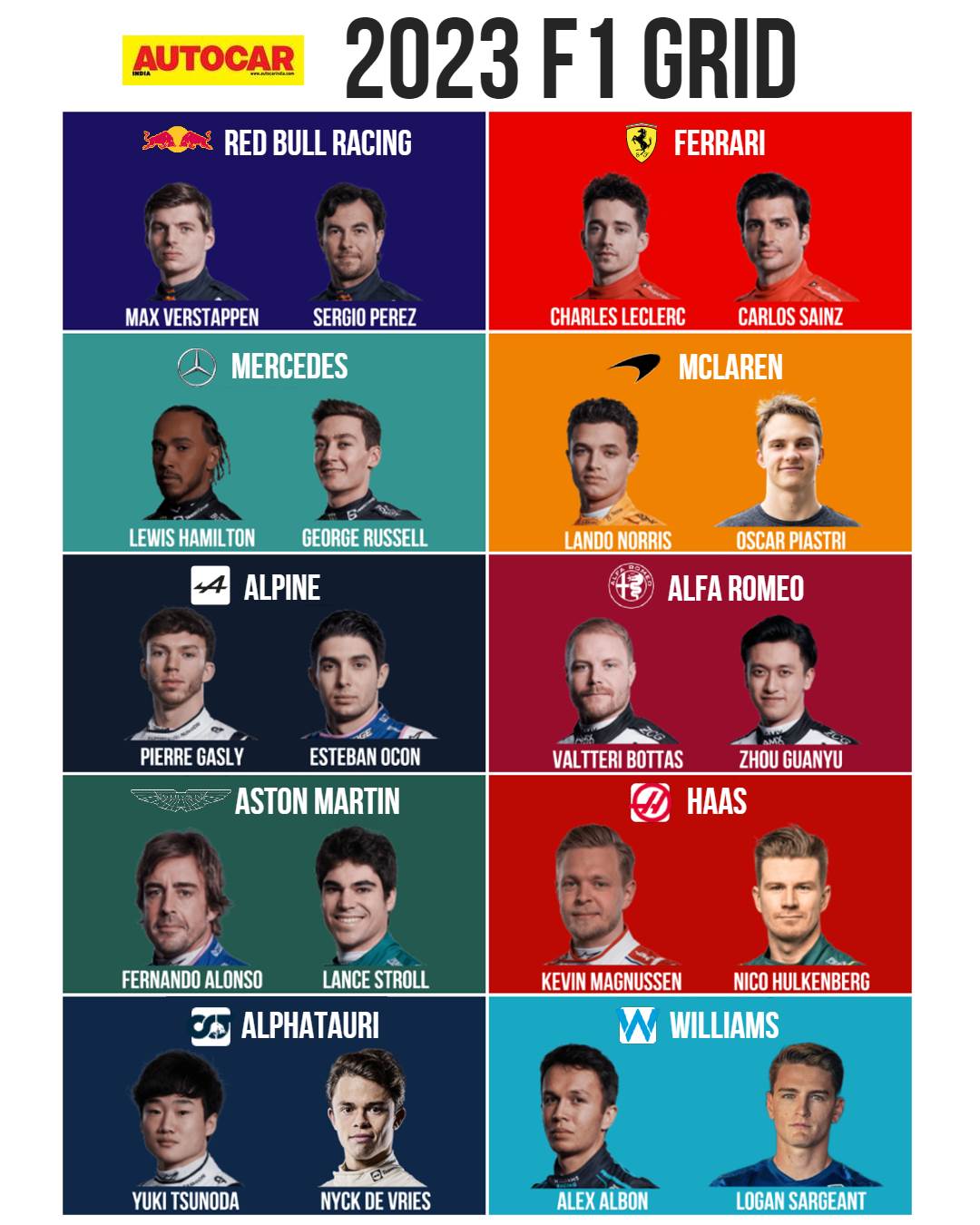 2022 was a record-breaking season for Verstappen, who clinched his second title after winning over 70 percent of the races. The Dutchman admits that replicating his dominant performance will be a tough task as he now chases a hat-trick of titles, but added, “it is also motivation to try and do well again next year.”

Sergio Perez stays on for his third season with Red Bull. There has been some friction between Verstappen and him, with all the drama at the Brazil GP ultimately resulting in Perez losing out on second place in the championship to Charles Leclerc. However, matters appear to have calmed down since then, with Perez saying “it’s all behind us and we’ve moved on”.

Ferrari started off the season strong, with Leclerc even leading the championship at one point. However, their title challenge quickly faded and Leclerc was left struggling to even hold on to P2 in the standings.

With Leclerc and Sainz, the team has two proven race winners. More than the car, it was questionable strategy choices that let the team down in 2022. But, they seem to have made progress on that front, especially at the Abu Dhabi GP.

After years of dominating the field, Mercedes found themselves with a car concept that ultimately just wasn’t the right fit. For the first time ever in his F1 career, Lewis Hamilton wrapped up the season without a single win or pole.

Nevertheless, there are some positives. The updates brought to the US GP helped boost their performance on tracks that don’t punish a draggier car – like the W13 – as much. This resulted in George Russell scoring his maiden F1 win. Mercedes seem to know where they went wrong this year, and should they be able to rectify this for 2023, they could very well join the title hunt.

Fernando Alonso’s shock announcement that he’ll be leaving Alpine to join Aston Martin played a decisive role in shaping (and shaking up) the 2023 grid. Alpine hurriedly announced reserve driver Oscar Piastri as Alonso’s replacement, only for Piastri to rather infamously announce on social media that he won’t be driving for the team.

After months of uncertainty, Alpine finally confirmed Pierre Gasly, who jumps ship after years of being part of the Red Bull fray. He partners Esteban Ocon, who managed to outscore his teammate Alonso this year. Both drivers are race winners and can boast of some strong performances. So, despite all the drama, Alpine seem to have landed up with quite a strong driver pairing.

2021 F2 champion Piastri joins McLaren for his rookie season, as part of a multi-year deal. Daniel Ricciardo was technically contracted with the team for 2023, however, after a series of disappointing races, it didn’t come as a surprise that McLaren decided to part ways with him. While he won’t feature on the grid next year, he’s strongly linked to a reserve role with Red Bull.

Lando Norris, meanwhile, has signed a new deal with McLaren that sees him stay with the team until at least 2025.

Alfa Romeo entered the 2022 season with a completely new driver pairing, but it’s a gamble that paid off. Valtteri Bottas’ experience coupled with a fairly reliable rookie in the form of Zhou Guanyu helped the team bag sixth place in the championship. So, it’s not surprising that they have decided to continue with the same line-up.

Zhou proved to be a consistent team player this year, but he finished the season a massive 43 points behind Bottas. So for his second season in F1, the pressure is very much on him to start matching his teammate’s performance.

With Sebastian Vettel calling time on his F1 career, Aston Martin was left looking for a driver who can deliver both, the experience needed to guide the team, as well as an image fitting to represent Aston Martin as a brand. Two-time F1 world champion Fernando Alonso fits the bill perfectly.

Aston Martin struggled this year, finishing seventh out of 10 teams. However, Alonso has maintained that it was the potential of the team that convinced him to sign on. He’ll race alongside Lance Stroll next year.

Nico Hulkenberg will be making his full-time racing return, in place of Mick Schumacher. While Schumacher impressed in his rookie season with Nikita Mazepin, driving alongside Kevin Magnussen this year highlighted that there’s still a lot that he needs to learn. The young German did have some strong moments, including points finishes in Silverstone and Austria. But that had to be weighed up against a string of crashes (denting Haas’ budget) and the fact that he accounts for less than a third of the points scored by the team.

Haas has instead decided to bet on experience this time. 35-year-old Hulkenberg hasn’t raced in F1 full time since 2019. But he has made five substitute appearances since then. Having driven for Williams, Force India, Sauber, Renault, Racing Point and Aston Martin, there’s no doubt that he brings a wealth of experience.

AlphaTauri signing Nyck de Vries was perhaps one of the more surprising driver announcements, since it’s rare for the team to look outside the Red Bull junior roster.

De Vries, who was part of the Mercedes family for several years, has had quite an unconventional path to F1. After winning the F2 championship in 2019, he was unable to find a spot on the F1 grid and instead moved to Formula E, where he won the 2021 title with Mercedes. He got his big F1 break this year, filling in for an ill Alex Albon for Williams at the Italian GP. A points finish in his debut race generated plenty of buzz and at 27 years old, he’s now set to embark on his rookie season. Driving alongside him will be Yuki Tsunoda, who stays on for his second season with AlphaTauri.

Williams confirmed Alex Albon for 2023 fairly early on, but there was a big question mark over who would bag the second seat. Last month, team principal Jost Capito singled out American F2 driver Logan Sargeant as a likely candidate should he secure the necessary Super Licence points.

A fourth-place finish in the F2 drivers’ standings was more than enough for the 21-year-old to meet that requirement, and he’s now been confirmed at Williams, replacing Nicholas Latifi. He’ll be the first American driver to race in F1 since Alexander Rossi in 2015.