The six-time MotoGP champion wins his first race since returning to MotoGP earlier this year. 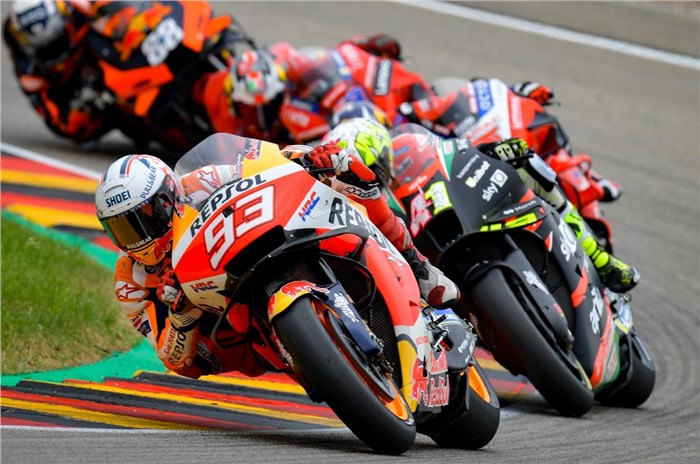 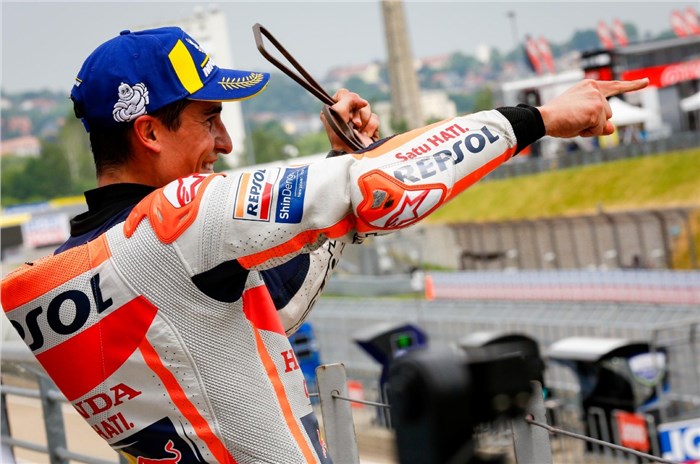 Marc Marquez took a landmark win at the Sachsenring, his first since making a return to MotoGP earlier this year.

On the surface of it, motor racing is 20 or 30-odd racers going around a track to see who’s quickest. But on a much deeper level, it’s about stories – each season is an act, each race a scene, and each racer a character. The script? Nobody knows. That’s why the racers line up every Sunday and that’s why we tune in to watch.

And there’s few better stories than a comeback tale. Sunday at the Sachsenring in Germany was the climax scene of one of the most extraordinary MotoGP comeback stories in recent times. In the 580 days before yesterday, Marquez never once stood atop a MotoGP podium. It was a period filled with crashes, broken bones, missed races, and a herculean recovery effort.

The comeback after this recovery effort hasn’t been without issue either. In the three races preceding the German round, the six-time MotoGP world champion registered three consecutive DNFs, even crashing out twice in a single race at Le Mans. But after the dust settled, Marquez retook his throne as SachsenKING, winning the eighth straight running of this race. Here’s how it came to be:

Johann Zarco took a surprise pole position, ahead of the man widely tipped to take pole instead, championship leader Fabio Quartararo. Marquez couldn’t make the front row, but a 5th place grid spot marked his best qualifying since his comeback in Portugal. The stage was set.

With a short run to the line and a track that’s notoriously difficult for overtaking, nailing the start was crucial. Zarco didn’t, Marquez did. He then backed it up with a brave charge into Turn 1, diving to the inside early and setting up Quartararo to steal 2nd place behind Aprilia rider Aleix Espargaro. He didn’t stay there for long, soon passing his fellow Spaniard to take over the lead of the race.

From this point on, he seemed to be riding well within himself, seemingly saving tyres and energy for the latter-half of the long 30-lap race. The relatively sedate pace caused the pack to bunch up behind him, with riders jostling for position on track. The chasing pack behind Espargaro featured championship frontrunners Zarco, Quartararo and Jack Miller.

The turning point came five laps into the race, when light rain began to fall on parts of the circuit. Some riders, like Espargaro and Zarco, got a little spooked by the drops on their visors. They backed off a bit, understandably, and dropped down the field slightly. Others, like Marquez, did the opposite. With the prospect of having to switch to his wet tyre-shod second bike for the remainder of the race, any thoughts of tyre conservation went out the window, and the Repsol Honda man began to lay down a red hot pace at the front.

Miller and KTM rider Miguel Oliveira also adopted the same approach as Marquez and made charges of their own, but by the time they secured 2nd and 3rd place, Marquez was 1.5sec up the road. Oliveira had the quicker pace of the pursuing pair, so it wasn’t long before he got past the Ducati in front of him and set about chasing down Marquez.

What followed was a fierce duel between the top two men. Marquez, fuelled by his burning desire to win a MotoGP race once again, and Oliveira, coming off the back of three consecutive podiums, the pair exchanged fastest lap after fastest lap as they streaked away from the rest of the field. The fact that neither of them are serious championship contenders only reinforced their commitment to victory.

Possessing two different riding styles and aboard two different motorcycles, the gap between the two ebbed and flowed over the course of each lap. For every challenge from Oliveira, Marquez seemed to have an equal response. But little by little, the KTM man chipped away at the gap, clawing back a tenth or two each lap until he finally got within a second of Marquez with five laps to go. But in doing so, he ran out of tyre life and had nothing to offer in the closing stages of the race. This allowed Marquez to eke the advantage back up to 1.5sec – a gap which he held to the chequered flag.

Behind the leading duo, Quartararo fought back hard after a subdued start to claim the final podium spot. Brad Binder made it two KTMs in the top 4, followed by an impressive Francesco Bagnaia, who stole 5th place from teammate Miller on the final lap after having started 10th and falling as far as 15th place in the opening laps.

Despite not being able to win the race, Quartararo managed to extend his championship lead, thanks to most of his closest rivals finishing behind him.

He now sits 22 points clear at the top of the table, ahead of closest pursuer Johann Zarco. The two Ducati Lenovo riders are now separated by just a single point, in 3rd and 4th place in the championship.

While Marquez’s victory certainly is a hugely impressive feat and marks a landmark moment in his comeback to top-tier racing, it’s worth noting that it was made possible thanks to certain special circumstances. The Spaniard’s recent injuries are to his right arm and right shoulder, so he faces difficulties in right-hand corners. The Sachsenring’s unique layout features 10 left and only 3 right hand corners, easing the burden on the injured side of his body. It’s also a track that Marquez gels exceptionally well with, having won the last 11 races he’s participated in at this venue.

Despite the advantageous conditions, Marquez could be seen gripping his right shoulder in discomfort after the race, indicating that he isn’t yet fully fit. The next race at Assen in the Netherlands is just one week away and presents a far more physically demanding challenge at a track with a more balanced layout.

Will the reinvigoration of victory be enough for him to feature at the front once again? Nobody knows the script. That’s why the racers line up every Sunday and that’s why we tune in to watch.