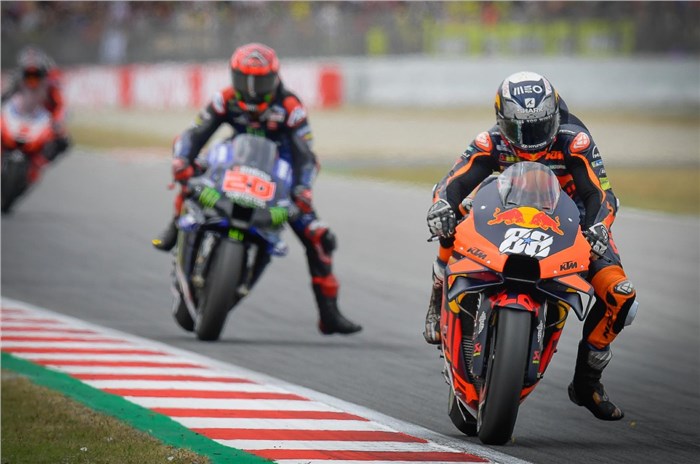 KTM rider Miguel Oliveira backed up his 2nd place result at Mugello last week with a victory in Catalunya, while championship leader Fabio Quartararo had a drama-filled race and eventually finished 6th.

It was a Sunday of unfulfilled promises and unexpected surprises as the MotoGP field took to the Circuit de Catalunya for the Catalan GP. Championship leader Fabio Quartararo spent most of Friday and Saturday imposing dominance over his competitors, laying down a frightening pace that few could even hope to match.

Combine this with the strong showings that the Frenchman has had at this track in previous years, and the great run of form that he carried into the weekend, you could have bet your house on a Quartararo victory in Barcelona. A podium, at the very least, was pretty much a certainty. And yet, the final standings show him in 6th place. Even though he actually crossed the line in 3rd. Confused? Here’s what happened:

What went wrong for Quartararo at the Catalan GP

Just like in the previous round in Mugello, he made full use of Yamaha’s new and improved holeshot device to get a flying start. And just like Mugello, it still wasn’t enough to overcome the Yamaha M1’s horsepower deficit; so the Frenchman entered the first corner in 3rd place. Not entirely coincidentally, the two men to pass him were aboard the two most powerful motorcycles on the grid -  Jack Miller on the Ducati and a hard-charging Miguel Oliveira on his KTM.

In a move driven perhaps by impatience, Quartararo attempted a somewhat outrageous pass on Miller at Turn 7 on lap 2. Not only was the pass unsuccessful, but Quartararo compromised his line and allowed Joan Mir and Aleix Espargaro to pass him as well. Now in 5th place and riding with a hard rear tyre that seemingly wasn’t up to temperature yet, the 22-year-old took a few laps to regain his composure and warm up his rubber. He then went about picking off everyone in front of him, until he found himself back in 2nd place behind Oliveira.

The ease with which Quartararo clawed his way back up the order, and the form shown by him in practice sessions, led many to believe that he’d have his way rather easily with the Portugese race leader. But Oliveira had other ideas. Sure, Quartararo quickly bridged the large gap to the KTM in front. But once he actually made his move on lap 12, he was met with a swift rebuttal from Oliveira just one lap later. From this point, he seemed happy to sit in 2nd place for a while, keeping himself close to the KTM’s rear tyre and seemingly lining up an attack in the final few laps.

The twist in the tale came with about five laps to go. To pretty much everyone’s surprise, the Yamaha man’s pace fell off a cliff, even though he had the more durable hard rear tyre fitted to his bike. This was then followed by a confusing shot of Quartararo unzipping his leathers, pulling out his chest protector and basically tossing it away.

He then proceeded to ride the remainder of the race with his leather suit unzipped and his bare chest visible to the onboard cameras, while still struggling for pace. During this phase, he was passed by Johann Zarco, in the process of which he had a moment at Turn 1 and was forced to use the concrete run-off between Turns 1 and 2. As a result, he earned himself a 3-second time penalty.

Jack Miller then proceeded to hound the Frenchman, but Quartararo fought off his challenge and crossed the line in 3rd place. While not a lot of clear information is available about what exactly went wrong with Quartararo’s riding gear, the prevailing opinion is that the airbag in his suit was triggered mid-race. Riders have often complained about breathing difficulties when the airbag inflates, and Quartararo is believed to have ejected his chest protector in an effort to alleviate this issue. For riding without a chest protector and in unzipped leathers, the Yamaha man incurred an additional 3-second time penalty, dropping him to 6th place.

As harsh as it may seem to have your airbag malfunction in the middle of a race, the Frenchman’s reaction to the situation was dangerous, not only to himself but also to fellow riders. Had he crashed with unzipped leathers, the consequences would have been terrifying, to say the least. And you don’t need to be a health and safety expert to understand why throwing a chest protector onto a live racetrack is an awful idea.

Quartararo was lucky to get away with such a mild penalty - most people believe a black flag would have been the appropriate course of action. And it’s understandable why the penalty attracted backlash from the racing community – just last week, Jason Dupasquier lost his life on track despite wearing the full array of riding gear.

All this drama overshadowed what was a brilliant win for Oliveira. Coming off a 2nd place finish at Mugello last week, the KTM man is demonstrating a brilliant turn of form for the Austrian manufacturer, courtesy of recent chassis updates.

Zarco’s 2nd place finish helped him claw back some ground in the championship. Miller inherited 3rd place to make it two Ducatis on the podium, followed home by fellow championship hopefuls Joan Mir and Maverick Vinales.

Perpetual centre of attention Marc Marquez put in his best showing since his comeback, even battling for a podium place early on, but eventually crashed at Turn 10 on lap 7. The same corner also claimed Aleix Espargaro and Valentino Rossi, who both crashed out later in the race.

Throw in the crashes of Marquez’ teammate Pol Espargaro, and the two Tech 3 KTM riders Danilo Petrucci and Iker Lecuona, and the Catalan Grand Prix was certainly a race of attrition.

Despite a difficult weekend, Quartararo continues to lead the standings with 115 points, 14 points ahead of Zarco. Miller stands third overall with 90 points.

The next race on the 2021 MotoGP calendar is the German GP at the Sachsenring from June 18-20.