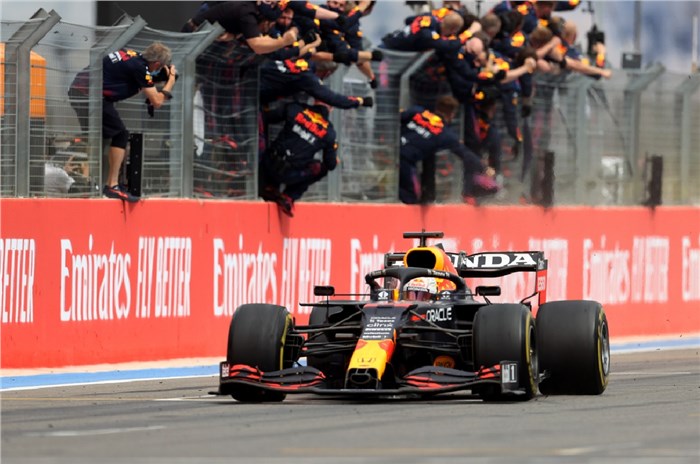 Max Verstappen defeated both Mercedes drivers to win the French GP and increase his championship lead. While Red Bull Racing opted for a two-stop strategy, Mercedes went for a one-stop, resulting in Lewis Hamilton missing out on victory with just two laps to go.

The French GP ended up being a redemption drive for Verstappan. The Dutch driver was hungry for victory after his tyre failure at the Azerbaijan GP. But he made an error on the opening lap, running wide at Turn 2 and handing the lead to Hamilton.

Red Bull attempted an undercut by pitting Verstappen on lap 18 of 53, and it worked. Hamilton pitted a lap later, but rejoined behind Verstappen. With Sergio Perez finally pitting on lap 24, Verstappen was back in the lead of race.

It soon became evident that the Circuit Paul Ricard was eating up tyres a lot more than expected. Red Bull – having learned its lesson from what happened at the Spanish GP earlier this year – switched Verstappen to a two-stop strategy, dropping him down to 4th place. But he had 20 laps on fresh medium tyres to gain ground. The fact that Mercedes decided to stick to a one-stop strategy certainly helped, and he breezed past Valtteri Bottas on lap 44.

Next up was Hamilton. The seven-time world champion was still recording some incredible lap times on his worn down tyres, but that was no match for Verstappen’s pace on the fresher mediums. With two laps to go, Verstappen overtook Hamilton into Turn 8 to take the lead and went on to secure his third win of the season.

This also hands Red Bull Racing its third consecutive race win – the first time the team has achieved this in the turbo-hybrid era. “Once we made the first pit stop, then you could clearly see on the hard tyres [the Mercedes] were pushing me hard from behind. But once we made the call to do a two-stopper, luckily at the end that paid off. We had to work hard for it, but of course, very rewarding,” said Verstappen, who also bagged an extra point for setting the fastest lap.

Bottas misses out on podium

After being overtaken by Verstappen, Bottas took to the radio to voice his frustration: “Why the **** did no one listen to me when I said it would be a two-stop?”

To the Finn’s dismay, he was also passed by Azerbaijan GP winner Sergio Perez with four laps to go. This handed Red Bull its first double podium this year.

McLaren walked away with a handful of points with its two drivers – Lando Norris and Daniel Ricciardo – finishing 5th and 6th respectively. AlphaTauri’s Pierre Gasly crossed the line in 7th place at his home race, while Alpine’s Fernando Alonso followed him in 8th.

Sebastian Vettel made a long first stint work to finish 9th for Aston Martin. His teammate Lance Stroll rounded out the top 10 after a late pass on Ferrari’s Carlos Sainz.

Verstappen is now 12 points clear of Hamilton in the title fight. Thanks to a double podium, Red Bull has also ramped up the pressure on Mercedes in the constructors’ championship, leading the scoreboard by 37 points.

Red Bull now has its home races coming up, with F1 heading to the Red Bull Ring in Austria for a double-header on June 7 and July 4, respectively.