The 2020 edition of the Dakar Rally will be held in Saudi Arabia from January 5-17. 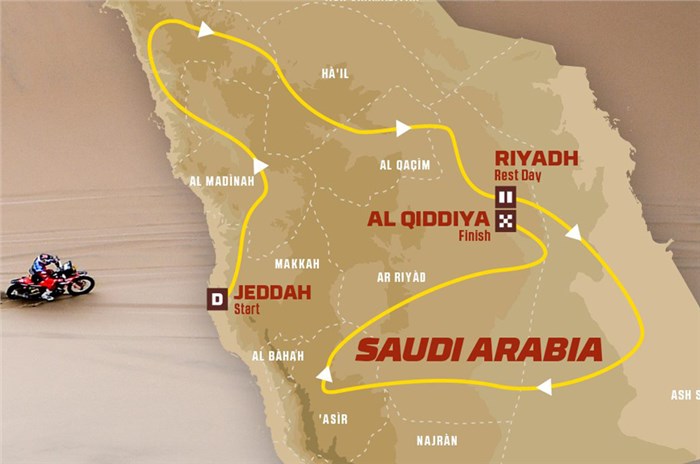 Dakar Rally organiser ASO recently confirmed that the event will move to the Middle East, with the 2020 edition set to be held in Saudi Arabia. This marks the end of the event’s decade-long stint in South America – where the rally has been held since 2009, after moving away from Africa. Now, further details for next year’s Dakar Rally have been revealed, including the route.

The 2020 Dakar Rally will take place from January 5-17, 2020, and will kick off in Jeddah (on the west coast of the country) and then move to Al Madinah, Tabuk, Al Qacim, followed by a rest day in the country’s capital Riyadh, before concluding in Al-Qiddiya, located around 40km from Riyadh. Much like this year’s rally in Peru, a large portion of the stages in Saudi Arabia will consist of sand dunes, but the official route map shows that the event will continue to test navigational abilities and endurance, with competitors having to tackle canyons, wadis and mountains as well.

The shift to Saudi Arabia comes after increasing uncertainty regarding the rally's future in South America. The 2019 edition in Peru was the first time in the Dakar Rally's history that it was held in just one country after Chile had dropped out of a potential return.

Commenting on the Dakar Rally’s Middle East debut in Saudi Arabia next year, Dakar Rally Director David Castera said: “Africa, South America… and now Asia. The third chapter of its history is particularly fascinating and exciting for a race focused on exploration like the Dakar.

“Here, in the largest state in the region, we can let our imagination run riot with the infinite possibilities for a tough, balanced and varied course. The sporting challenge that we are putting together for the 42nd edition will tap the full potential of this vast country and its mosaic of deserts, mountains, canyons, valleys and coastal landscapes.”