2020 Andalucia MotoGP: Quartararo makes it two wins in a row 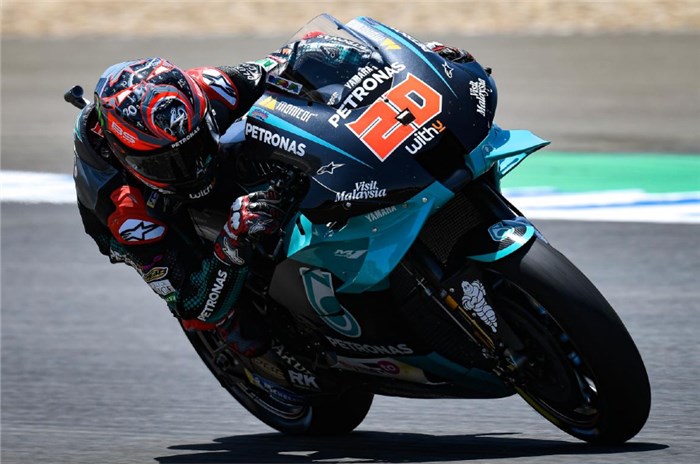 Fabio Quartararo’s victory at the Jerez circuit in the second race of the 2020 MotoGP season marks a milestone for the 21-year-old Frenchman – back-to-back wins. He has become the second youngest racer to achieve the milestone, after Marc Marquez. Maverick Viñales took 2nd place, with Valentino Rossi crossing the line 3rd, making it a Yamaha 1-2-3 finish. The podium finish was also Rossi’s 199th MotoGP podium; it’s been over a year since his previous podium finish at the 2019 American GP.

Yamahas fight it out at the top

Starting from pole position, and on the back of his first premier class win, Fabio Quartararo was the man to look out for at the Andalucía GP. Quartararo got a strong launch off the start line, with the two Yamahas of Viñales and Rossi fighting it out behind him. In the opening laps, Vinales ran wide, which allowed Rossi to get past him. Despite a number of attempts to get past Rossi, Viñales didn’t manage to overtake him until the very last lap. The feud between the two factory Yamahas allowed Quartaro to pull away from the rest of the crowd, to an almost uncontested victory.

Behind the Yamaha riders was Francesco Bagnaia in 4th and Jack Miller in 5th. With 10 laps to go, both Pramac Ducati riders managed to get past Viñales. Unfortunately, Miller lost his front end at turn 9, ending his race.

In one of his best performances yet, Bagnaia also got past Rossi to take 2nd place. The Italian, a product of the VR46 Riders Academy, was starting to pull away from his mentor when his bike started spewing smoke, putting an unfortunate end to what could have been his best-ever finish.

This saw Rossi back up into second, with Viñales just behind him. After several failed attempts, just when it looked like Viñales wouldn’t find a way past Rossi, the latter ran slightly wide at Turn 9 and Viñales pounced at the opportunity to move up to 2nd place.

Takaki Nakagami’s 4th place result marks the Japanese rider’s best finish in the premier class - 6.113secs away from the win, and half a second from the podium. Joan Mir finished in 5th, followed by Andrea Dovizioso, who recovered from a P14 start. In 7th place was Pol Espargaro, with Alex Marquex in 8th and Johann Zarco and Alex Rins rounding off the top 10.

The race also saw a fair number of DNFs – eight in total – with Bagnaia, Franco Morbidelli, Brad Binder, Danilo Petrucci, Miller, Aleix Espargaro, Iker Lecuona and Miguel Oliveira all having to retire. Just days after undergoing surgery for a fractured humerus, Marc Marquez decided to pull out of the race after completing a string of warm-up laps on Saturday.

The next race will be the Monster Energy Grand Prix Českérepubliky on August 9, 2020.